Life between the lakes, part 11 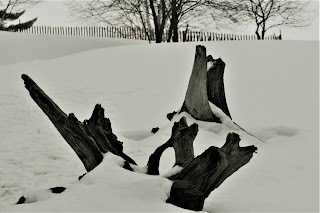 Today, Mother Nature smacked Deer Park with her wet, frozen mitten and the word of the day was “snow.”

If that wasn’t enough, another 3-4 inches accumulated within two hours and the latest advisory says this won’t stop until after midnight. Right now we are knee deep.

The plow operator stopped to chat and he informed me that three miles down the road the skies were clear.  Considering I am 30 miles from town, I find it quite impressive that they’ve been by three times since 6AM today to clear it. That’s how they roll up here.

I’ve had the snow blower out a couple times and lucky for me there is a kind soul just down the road who has been coming to clear the massive mound that builds up at the foot of the driveway once the plow passes. Having good neighbors in the UP is a blessing; that’s how people roll up here.

If you see a car stuck up here, there is an unwritten obligation bestowed upon you to stop and check on them. Sometimes they are just tourists who pulled off to the side to walk into the woods, but it can also be someone who is stuck, out of gas and afraid.

It happened to me about a dozen years ago when I blew a U turn and became part of a snow bank. I'm guessing the guy who eventually helped me, heard the tapestry of obscenities I was hurling into the woods before he stopped. Or maybe it was just the way people like to pay it forward up here.

The dogs are resting peacefully after their day in the snow. Two walks, a little play and hearty dinner of hot ground beef and kibble have made them content and I share in their satisfaction of what we did today.

Posted by Vacation Publishing at 2:25 PM