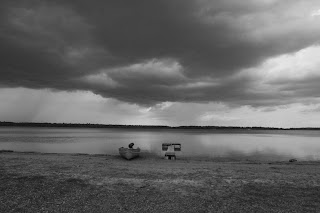 At some point every summer, I sit in a 14 foot Alumicraft boat in the middle of Muskallonge Lake in the Upper Peninsula of Michigan and drift. It’s peaceful, serene and necessary. This experience sustains me and gives me something to hold onto in this often slippery world.

As a teenage boy, I was given freedom to roam the lake with an outboard motor. This was long before I had my driver’s license. When starting and stopping the motor I am treated to a rare and delicate fragrance; the grey puff of a gas/oil mix. It is my mechanical equivalent to a lilac, my favorite flower.

I could live off of that smell.

My Dad’s motor was a Sea King, Five Horsepower, purchased at Montgomery Ward in 1958. In the seventies and eighties newer motors were introduced at the cabin but nothing was as dependable as Dad’s Sea King. One winter someone broke into the shed and stole two of the newer motors but left the old Sea King. But the joke was on them, the Sea King was the only one that worked!

Muskallonge Lake is one mile N/S and two miles E/W. When I’m floating alone in the middle of the lake, I could not be further removed from civilization unless I was drifting in Lake Superior, which is only a mile away. It is ironic, because being alone, in the middle of nowhere is where I feel the most connected to my family, even those who are gone. . . especially those who are gone.

I believe being alone gives us an opportunity to reconnect with old memories while at the same time unlocking others. I remember details of family vacations from over four decades ago and share them with my family once in a while.

“How do you remember this stuff,” they ask.
The secret answer is: “I remember it because I have never stopped thinking about it.”

We cook, drink, share our lives, love, fish, explore, play cards and board games all while carrying on about earlier versions of our lives at the cabin. We miss those who are gone and make fun of those who didn’t come that year. . . . well . . .not really, we miss them too.

We pack a lot into the time we have at the cabin, but there is never enough time to do everything we want to do. Why is it we feel like we did everything as a kid but cannot come close to repeating this feat as adults?

At the end of our time together we have laughed so much we have to open the windows to let some of the laughter out. It necessary in order to create room for what we know will be coming next year. 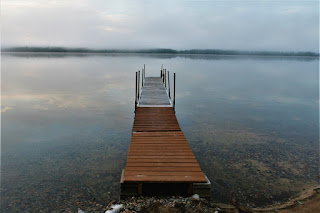 And each year, when it feels like we are connecting with the spirit and innocence of our youth; The truth is, we probably are.
Posted by Vacation Publishing at 4:39 PM 1 comment: 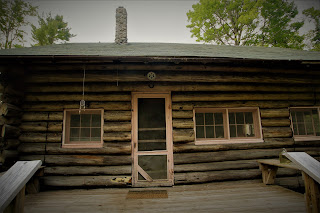 In 1975, I celebrated my tenth birthday at the cabin, surrounded by family and friends. Birthdays at the cabin were a big deal. With two and sometimes three creative mothers there at the same time, the day was well organized with games, outings and food. Since my cousin Norman and I were the only ones with our birthday in July, the focus was always on us---and we relished it. . . slightly. . .but trust me, the delight was shared among all of the kids.

Our alarm clock was a scratchy Sousa march from the Brunswick Victrola. If we weren’t downstairs before it was over, we got polka after polka, followed by cold pancakes.

After breakfast we would all pitch in with chores. This was a log cabin, without electricity or plumbing located in the thick of the Upper Peninsula and we needed to be ready for anything. We burned paper, carried garbage to the dump, collected kindling, chopped wood, helped our mothers with meals and dishes and helped our Dads by staying away from whatever they were working on.

Baloney sandwiches and Orange Crush fueled our afternoons. Reese Peanut Butter Cups and Bit-O-Honey, made them better. Games of wiffle ball in the side yard were friendly but competitive. Killing pop bottles in the dump with BB guns was a challenge but it was harder with a Wrist-Rocket slingshot.

We either smelled like Coppertone, Bactine or OFF. We pooped in an outhouse, bathed in the lake and drank water from a well. The fishing was always good and we all discovered adolescent freedom in a fourteen foot Alumicraft boat with a 5 horse outboard motor before we could drive a car.

Those were days without heartbreak, college, kids, politics or bills. One by one, our elders left us. Their loss created new memories. Ahh, ... those sweet, sweet memories. But hidden on us all was the subtle reminder that one of us is next. Each day at the cabin is a memory in the making.

But now, for one week out of the year, we take the time machine back to relive those days we loved; erroneously believing life hasn't changed.

It was the summer of 1975. In no time at all, our lives moved from there to here.