My new life in a small town 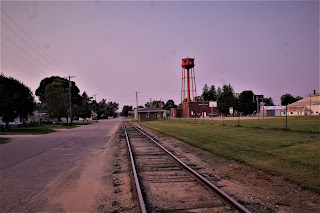 I now reside in the town of Newberry. It is located the Upper Peninsula of Michigan with a population estimated at about 1368 after its last census. That makes me 1369.

The only traffic light is about 3 miles from the village limits and there are no stop signs on Main Street. The clock at the bank has been precisely one hour slow since I moved to the area in December but everything and everyone else seems to be getting along at their own pace just fine.

There is also a railroad less than 100 yards from my house. The tracks are old and crooked and the trains have to crawl through the neighborhood before reaching the Newberry rail yard. So far, the sound has been soothing. It is a very different kind of quiet in the village as opposed to where I came from living on the lake.

I’ve always known that life moves at a different pace up here. This week I was part of that pace when I had an issue with my Jeep. It will take the dealership a week and a half before they can look at it. It took a day and a half to get a tow just a half mile down the road.

Luckily, I can walk to the grocery store without wearing too much rubber off my shoes.

Tiger Jack had a rough first night at our new place. I’ve noticed signs of dementia over the last couple months and he appears to be exhibiting signs of “Sundowner’s Syndrome” (exacerbated dementia, nervous pacing etc.) at night. I am trying to regulate it with a sleep aid for him and it has gotten better each day. Making sure my dogs have a smooth transition is my top priority.

The jury is still out on this move. It is probably too soon to say whether I made the right choice or not but each day is getting better. It must.

My cell phone still isn’t operable and it appears I have lost my contacts and photos and a whole slew of little things have made my move less than stellar.

So far, the people I have come across in town seem happy and pleasant. I have met the couple next door who are very friendly and they love my dogs. An “across the street” neighbor has either waved at me twice or flipped me off as they pulled out around the same time I was walking the dogs. I will assume the better.

I’ve enjoyed the late afternoon rumble of the freight train inching its way along the tracks on its way out of town and if I had a working cell phone and knew more people in town, I would seriously consider jumping the train before I am too old to do that sort of thing.

Meanwhile, on Tuesday night’s walk I observed that the clock at the bank is no longer working. But I’ll bet you a nickel that nobody around here is going to make a fuss.

Posted by Vacation Publishing at 6:15 AM No comments:

Life Between the Lakes, the last chapter? 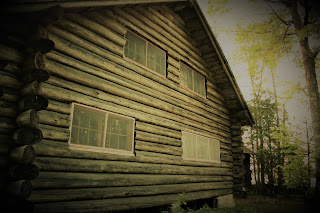 It has been both a pleasure and a privilege living in Deer Park, MI for the past eight months. I never imagined my stay would last this long (and neither did my gracious landlady and her family.)

The experience of living in this area has been nothing short of amazing. But all good things have to come to an end. Thank you Aunt Carla and your family for allowing me to borrow your sacred place. Being here meant a lot to me and inspired me beyond belief.

So much of life is noise, much of it of our own making. And much of modern humanity worries what will happen if they take the risk and wonder what they will find when the noise stops.

The Upper Peninsula became a place for me to plum these thoughts and ideas that I have always felt and known I’ve wanted to explore.

I’ve witnessed the changing of three seasons, have seen hundreds of birds and watched the eagles help themselves to free fish almost weekly.

I’ve fed the chipmunks and felt like a giant.

I’ve faced the roar of Lake Superior and felt so small.

And I’ve walked with Jack and Needa almost 500 miles up and down the county road we've been living on.

I’ve seen light from ancient starts illuminate the night and falling starts lite the sky like bursting pearls that burn out in a flash. I’ve seen a flock of cute fuzzy goslings grow into adult geese and take flight.  I’ve watched the coyote, fox and deer do what they can to survive and I’ve watched Lake Superior slowly freeze and thaw.

I’ve seen the way the sunrises and sunsets around the lake shift as the axis of the earth changes. But more importantly, I’ve read and reread every poem Jim Harrison has ever written and have upped my writing game as a result. I’ve written more in the last 8 months than I have in the past 8 years.

Between the lakes you’ll find cabins, forest and shoreline. But within them are places you cannot find with the point of a finger. No photograph completely captures the patchwork of stories passed down, but rediscovering them helps us remember them or perpetuates our dream about them.

I’ve walked for hours on the roads, shoreline and in the woods, watching life in the forest unfold as the seasons change and I am unsure all of me will leave when I do.

And that pretty much sums it up for now.

Posted by Vacation Publishing at 6:13 AM No comments: