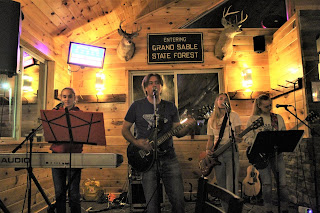 You never know what you are stumble across inside a bar in the Upper Peninsula. During my recent visit to my favorite town, Grand Marais, MI I found what can now only describe as my new favorite band.

Grand Marais is in Alger County with a population of about 350 at sits quietly on the Lake Superior shore. It provides a bay of refuge and was once a wildly thriving town that boasted hotels, saloons during the logging boom from the late 1800s until about 1900. Today it is largely a tourist town with three restaurants and a couple of bars.

We arrived at the newly constructed Grand Marais Tavern (on the footprint of the old Sportsman’s Lodge Restaurant.) The beer was cold, the shots were a-plenty and the fact that my Good Cousin David Haskell was picking up the bill made everything extra special for my birthday. But the real surprise of the night was discovering . . .and I’ll say it again. . .my new favorite band; “Don’t Tell Mom.”

“Don’t Tell Mom is a family act from California. The Gabriel family has been a part of the Luce County/Lake Superior/ Deer Park region for a very long time. The band consists of George Gabriel and his three teen aged daughters, Ana, Alex and Ari. They’ve been spending their summers in the area for a while, yet still are considered one of the best kept secrets of the UP music scene.
George is an amazing and accomplished multi-instrumentalist, composer and rock star in his own right. He has composed music for television, film and radio and was a touring member of the classic band Pablo Cruz. But now, with three talented daughters, George is a “highly trained professional Dad who plays music on the side.”

Gabriel exposed his daughters to a wide variety of music as they grew up, encompassing rock and roll from 1950’s up until modern day. This is all featured in their set lists.
During my night at the Grand Marais Tavern I watched countless people enter; stop at the door and motion the rest of their party through the doors as if to say “Hey, come in and check this out.” You don’t find a whole lot of live entertainment in the UP, much less a band of this caliber.

I had a front row seat as the groove unfolded. The band, led by George, was enhanced by the sweet harmonies of the girls. Their guitar, bass and occasional keyboard playing was more than competent; these girls came to rock.

A professional Dad and his jewels playing great rock and roll with Lake Superior only a couple hundred feet away beats cable news and a jukebox any day. They made the patrons feel like they were as happy to be there as they were.

Late into the band’s third set, a bachelorette party invaded the Tavern. Tables were cleared in order to provide a dance floor. The “Don’t Tell Mom” set list is well paced and the night I saw them, they wrapped up their performance with the Journey hit “Anyway You Want It.” But stop right there---I gotta tell ya; with George searing those Steve Perry high notes near the end, the Grand Marais Tavern shook like one of the storms that made Grand Marais famous.

Very quickly the party decided they did not want the band to leave. “Don’t Tell Mom” obliged and played some encores.

George is an exceptional musician who has accomplished much. You have probably heard his work
before but not known it. As a result, it is not surprising that some of the best parts of the show are when the girls are featured---the girls he raised on rock and roll and in this family there is plenty of talent to go around.

The night I was there 18 year Alex sang Bryan Adams, “Summer of 69” and you would not have known that they only learned the song that day. And for my money, hearing Van Morrison’s “Brown Eyed Girl” with the angelic harmonies sung by these young women was not only the icing on the cake, but it was the honeyed cake you don’t usually find in these remote places.
George is a laugh a minute guy. The girls and their mother Jen are as sweet as Tupelo Honey. Mom comes to all the gigs, helps with equipment and has the right to be ultra-proud of her talented and beautiful family.

Check out the “Don’t Tell Mom Band; ”on Facebook and if they are anywhere near you in your Upper Peninsula travels this summer,or back in California, it will be well worth the drive to see them.
They will be back at the Grand Marais Tavern on Saturday, July 21 and at Pine Stump Junction (On Highway 407 just north of Oswald’s Bear Ranch between Newberry and Muskallonge Lake a few more times this summer.

Posted by Vacation Publishing at 5:57 PM No comments: