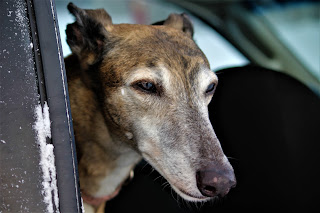 Needa was the sweetest dog I’ve ever known.

Her heart was willing to continue but her body could no longer contain her spirit.

For the last few weeks I lived the slow, unfair, heartbreaking anticipation of the inevitable. With so much love emanating from her it was hard to feel like I was doing the right thing when I called the traveling Vet to come to my house.

Yesterday, I drove her to Paradise and back. Her head was out the window the entire time; soaking up life as she’d always done; a reminder of what a flicker our existence is.

She took more out of life than it took out of her. I spent yesterday evening giving her treats and literally had to show her that the jar was empty before she would leave the kitchen.

Petie wasn’t present when the Vet performed the euthanasia and it concerned me. But moments after Needa was gone, he came into the room, gave her one last look and sniff. He looked lost when he returned to his bed in the other room.

I was the only human she knew intimately but she loved everyone. Yet at the end she saved the best of her love for me. She raced for almost 2 years before she was retired but her greatest victory was racing her way into my heart.

In her last hour Needa displayed happiness and gratitude after a big breakfast and a belly rub.  She left paw prints on the heart of everyone she ever met.

She was a blessing to me and many others and I am grateful that I was with her at the end of her beautiful life, fulfilling the promise I made to her.

In our final act of love her eyes got heavy and I held her sweet face in my hands, comforting her while trying not to cry. But instead of her heart quitting after the usual 20 seconds or so, it continued. She was not in pain and her heart became a slow beautiful murmur that lasted a couple of minutes before she slipped away. I know her heart did not want to leave me and she was just following my heart’s lead.

Then her soul ascended into Heaven; a passage she earned. I was there and as painful as it was I would not have had it any other way.

Posted by Vacation Publishing at 3:00 PM No comments: 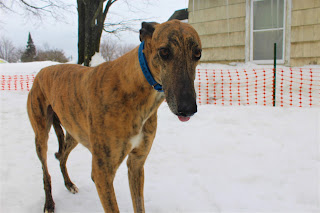 If you are like me, there are instances when you feel lost.
Sometimes when we think we are about to head down a road we are not familiar with and may not necessarily want to be on in the first place, we end up someplace else.
Needa and I have been on the bittersweet path of memories and sadness after losing Jack. But one thing I know too well is after such a loss, we keep on living because we have to.
My mourning of Jack will never end. I tear up when thinking about him many times a day and I cannot talk about him to anyone without crying. Some of you know of my faithfulness to the breed. I will always have a greyhound.
So, here is the important story.
Not long after Jack left us, I sent a Facebook message to my friend Art, the President of GreyHeart Greyhound Adoption.
We call him “GreyHeart Art.” He and his wife Assi are so committed and knowledgeable, valuable to the organization and breed that I hope they never burn out because they have done so much for the organization.
Exactly one minute after I sent the message my phone rang. It was Art.
This is a paraphrased version of the conversation.
Art: “Hey Pete, its Art. You’re never going to guess where I am right now.”
I gave him a witty response that I cannot recall.
Art: “Assi and I are on our way home from West Virginia with two new greyhounds.”
Me: “What? Really?”
Art: “One of them is named St. Pete.”
At that moment there was silence in the conversation as I could not believe my ears.
Art: “I think his call name in the kennel was Petie.”
My eyes welled up with tears and I got the proverbial lump in my throat.
I can’t recall the rest of the conversation but immediately, I felt I had to have this dog and asked Art to hold him for me as I thought it over. Was it an impulse decision? Maybe. But it was also like one of those touching moments in a Hallmark movie that never quite happens in real life, but now it was happening to me.
Needa and I made the trip back home this past Thursday and met Petie on Friday. There were four dogs in the yard, all happily prancing about. Needa, the elder of the group at 12 and a half, joined right in.
During the course of about a half an hour as I was talking with everyone, I would check on Needa. I saw Petie and Needa together several times; both of them away from the others, possibly comparing notes. There was no doubt that these two were already getting along famously.
We drove home on Saturday morning. As we made our last turn for home onto M-28 descending on Newberry, the sun was bright and there was an eagle sitting majestically in a tree not more than 100 feet from our turn as if approving our arrival and welcoming Petie to his new life in the north.
Thinking back, I don’t exactly know what prompted me to send Art the message at the exact moment I did. I am simply calling this series of events, serendipity.
In the same way Needa helped Jack, Petie is now helping Needa as she enters the last phase of her beautiful life.
Petie is beautiful and his brown eyes shine like finely polished marbles. He looks a lot like Jack but he is not replacing Jack.
He was successful in his career as a professional racer. Greyhounds are pulled out of racing when they are injured or start losing. But St. Pete was victorious in perhaps the most important race of his life, which was finding his way into my heart.
Meanwhile. Needa and I will enjoy the riches of our once in a lifetime winning ticket.

Posted by Vacation Publishing at 2:48 PM No comments:

All good things must come to an end 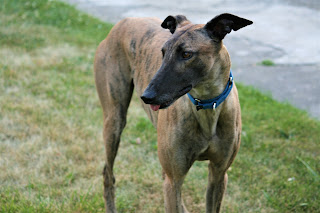 And it’s not fair.

This is an understatement because my life with Tiger Jack Burke wasn’t “a good thing” it was extraordinary.

He first entered the race into my life on May 24, 2012. But how did he pass me so quickly in the continuum of age?

Tiger Jack had been in decline for a while but I’ve always maintained that I would let him leave on his own terms. The barometer I used to measure this was if he chattered his teeth when I asked him if he wanted to go for a walk. This is something Greyhounds do when they are excited. He was still chattering yesterday and as Needa ran around in the new fallen snow, Tiger Jack romped along with her. When running, greyhounds spend 75% of their time in the air; they actually fly.

I prayed that when Jack was ready to leave he would let me know. Last night we were up several times and he seemed more nervous than usual. I’ve been sleeping on the couch to be with him since I moved into my house in August, so he was rarely more than 5 feet from me.

He had full breakfast with Needa and we all went to doze for a while to let their food digest. But then he had his stroke, and immediately I knew it was time.

The stroke subsided after a few long, terrible minutes and he had a few smaller episodes throughout the morning. Getting a Vet to come to the house for euthanasia in the UP isn’t like at home. The visiting Vet was booked. The Newberry Vet was booked and was going on vacation after today.

I sat with Jack, trying to decide what to do.  I didn’t want to have to drive him to Sault Ste. Marie and have him put down in an office setting. I wanted him to continually see my face and hear my voice in what little time I knew we had left. A drive to the Soo was out of the question and I sat alone and dejected.

Then the phone rang. It was the traveling Vet. She said she could make it to Newberry in a couple hours.

For the next three hours Jack was in a state of relaxation.  I rubbed his head, scratched his ears and reflected upon the many scars on his body that came as a result of wipeouts on the track or scraps in the kennel. But they had healed long ago and by the time he got to me, he was a pistol.  A broken toe on his front left foot ended his racing career and it is what ultimately steered him to me. It healed long ago and I held that paw for three hours.

Most greyhounds don’t race more than a year or two and a miniscule amount become champions. This is why adoption is so important for these 45 mile an hour couch potatoes.

For the remainder of the morning I laid on the floor with him, soothing, comforting and telling him how much I loved him and that everything was going to be alright.  Even though he had a hearty breakfast, I hand fed him his favorite treat (chicken breast) until he could eat no more.

If I moved to wipe my eyes, he kept reaching for me; grabbing my arm and then resting his head on it; further proof that he knew it was time. I caressed and comforted him. This continued until the Vet arrived.  Needa was with us looking on at the end. His eyes get heavy after the injection. With a relaxed grip on his paw, I rubbed his back as the air left his lungs and just like that, the dread evaporated.

I’ve always said of this big, beautiful brown eyed boy that despite his age (14) he could play a greyhound half his age in a movie. He was a bad ass and I lovingly referred to him as Clint Eastwood his final months. My only regret with Tiger Jack Burke is that we could not have spent more time together here on earth. The truth be told, I was missing him long before today in what I call “the unfair heartbreaking anticipation of the inevitable.”

I conservatively estimate that Jack and I walked just over 8000 miles together from May of 2012 until yesterday, December 28, 2021.

Or, just short of 30 trips from Royal Oak to Mackinac City.

Or from Detroit, MI to London, England and back.  Ok, no more comparisons, I know you get the picture.

A good friend, who has known of his condition sent early condolences, knowing it was going to be strange and sad for me in these days to come.

I promised Jack I’d see him again in heaven, but hopefully not for a while.

From his broken toe to my broken heart, I will continue to love him. His passing has left a raw gaping hole in my heart.

Tonight, I keep expecting him to wake up from his nap, come to my desk, put his head in my lap and snub me when I try to kiss him.

My house is one box of Kleenex lighter this evening.

He took more out of life than it took out of him.

He was a Champion of the Heart.

Posted by Vacation Publishing at 2:36 PM No comments: