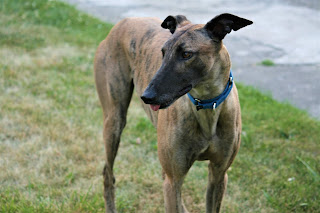 Seven years ago I planned this event carefully.

I’d pick him up after work, before the Memorial Day weekend, so we could have extra time for him to get acclimated to his new house and father. After a long goodbye with his foster family, on May 24, 2012 Tiger Jack Burke and I were on our way home.

Home is something greyhounds don't really have until they can lay on the couch, run off with shoes, dig in the yard, destroy squeaky toys, get smothered with hugs and kisses only to fart at totally the wrong time and be laughed at instead of scolded.

It’s not a real home until your “person gets you a nice bed, lets you sleep in theirs, ” And (against their better judgment) buys you more squeaky toys.

Everything in your life changes when they tell you the arrangement is permanent--- as in “you’ve run your last race: and “there will be no more bouncing around.”

Though they may not understand the words coming from our mouths, greyhounds eventually understand the new routine is for real. They accept the affection and the two way trust takes over and BOOM! There is love. It’s an unbreakable bond that is so strong we can’t imagine life without them.

I didn’t think I was ready for a dog and even if I was, what kind of dog would it be? I loved my Golden Retriever, Sparky, with all my heart. He passed in 2006 and was so popular, a news story about his passing was on the local six o’clock news throughout Detroit.

But in the spring of 2012 my heart had an unexpected growth spurt---suddenly the empty void of loss, longed to be full again and voila! There was now room inside each of our hearts for a mutual expansion. Just like jockeying for position in a race, Tiger Jack Burke found the pathway off the track and landed in my heart.

It’s been seven hilarious years with this guy. Six and a half have been with his better half, Needa Lou. But this day is about him. His five o’clock shadow has lightened, but has not gone grey.
He will be 12 in November and has shown no signs of slowing down. He still leaps 3 feet into the air to catch balls, walks two miles a day and he still rests his head on my lap as we watch TV. We celebrated with a nice dinner of succulent chicken breast and warm kibble.