Tears are another expression of Love


My father, Tom Wurdock was a lot of things to a lot of people during his life. He served his country with pride as a member of the US Air Force, was a beloved teacher, community leader, poker buddy, and respected voice of reason among his community, family and peers. He was an avid outdoorsman, had a great sense of humor, had a passion for limericks and was one of the kindest and gentlest souls on this earth. He lived his life with gusto, always interested in what was going on around him and thrived on all that life offered while always putting the needs of others above his own. But all his accomplishments pale in comparison to what he excelled at the most, which was his role as loving husband, father to his three children and grandfather to his two granddaughters. 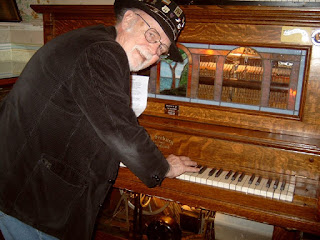 Royal Oak was a different place when Dad grew up. He was born in the Washington Square Building in 1931 when it was the Royal Oak Hospital and had his tonsils removed while lying on the dining room table by the family doctor. He played marbles in the alley on the way to school, kept chickens in a pen at the family home on Maple Street until his mother got tired of them following her into downtown Royal Oak when she went to shop or call on friends.


He graduated from Royal Oak High School in 1949 where he played in the band, sung in the choir and played center on the football team.  He attended Albion College and worked during the summer as a route carrier for the United States Postal Service.   After graduating from Albion College he enlisted in Air Force and was stationed in Bar Harbor Maine.  After the Air Force he took advantage of the GI Bill and went back to school where he received his Masters Degree in School Administration from Michigan State University and began his teaching career at Oak Park High School in the late 50’s where he taught vocal music and later served a term as President of the Michigan Vocal Music Association.  He moved to the Waterford School District where he taught English and creative writing until retirement in 1992.


One of his greatest loves was the family vacation experience, spending the long days of summer living in a rustic log cabin, deep in the Hiawatha Forest of the Michigan's Upper Peninsula a mile from Lake Superior along with the Ronald May family.  His days were filled teaching children and grandchildren how to respect nature, throw horseshoes, bake cinnamon rolls, fly fish, stand in awe at the light show from the Aurora Borealis and enjoy a good read by kerosene lamp in front of a crackling fire.  One minute he was tuning an outboard motor and the next he was tuning the piano in the music room.  He had a passion for crossword puzzles, word games, spy novels and military history.


Recipient of the 2012 Citizen of the Year honor from the Royal Oak Chamber of Commerce, he was known to many as “Mr. Royal Oak,” a title he carried with pride, honor and a chuckle. He thrived while serving the Royal Oak community spending hours of volunteer time to the Farmer’s Market Committee, the Police Oversight Review Board, numerous committees at the First United Methodist Church and the Royal Oak Historical Society, where he served as President from 2003-2005.

Though it was hard to see his health decline over the past few years he never lost his sense of humor or kind and gentle attitude toward others. He knew he was loved by his family and his family knew they were loved by him. He respected you even if he didn’t agree with you and he will be remembered most by his ability to instantly make people feel like they mattered. He will continue to be part of the daily life of his family in memory and spirit.


Reaching eighty four years of age was a milestone. Not everyone does it, can achieve it, nor does everyone even want to do it. Who among us would not want to live a long life you may ask? You would think that reaching a ripe, older age may a goal for everyone, but it’s not. This is because you have to work hard at it.  There’s a lot to it. . .

It’s recognizing that when you make a good choice in life, more good will follow it. It’s facing the hard decisions instead of looking for the easier ones. It means proudly serving your country, alternating late night feedings with the woman you love, fretting over money and putting your ego aside for the sake of your family and friends. It means attending a lot of concerts, sporting events and driving long distances to visit your kids. It means cutting fishing trips short to work a second job in the summer to pay the bills.  It means missing out on choice fishing opportunities as your youngest son finds himself snagged on a log and giving him your pole because you know there is only about 10 minutes of light left to fish before the rusty evening sky washes away the day. But relinquishing your rod and reel also allows you to enjoy the sunset a little longer and tuck the memory away for another day.

For Tom Wurdock, having reached 84 years of age meant he knew he sometimes had to make unpopular decisions with his family but was able to look back and still be glad he made them.  Throughout his life it was knowing things like “this is going to hurt me more than it does you,” really means you love your kids more than they’ll know. It was also watching his waist line grow and realizing that kids wear their baggy pants for reasons different than his.

In the past year he drank more Oberweiss chocolate milk and Boston Coolers than his wife approved of but it sure beat sitting alone in a hospital bed after visiting hours were over and reflecting on life with tears because you knew not the hour or the day. He was always surrounded by someone he loved of someone who loved him.

Growing older meant discovering new things at each milestone birthday because he knew you could not change your age. But this also meant he could look back with a smile and erase any regrets that may have lingered too long. It was finding simple truths in everyday life, as confusing as it is, and knowing that it’s never too late in the afternoon to learn something new.  Aging was great, but there was also the sadness of losing your best friends one by one. It was learning about why granddaughters get tattoos and accepting the fact that you need not understand why they do it.  It was also rejoicing that you don’t have to work two jobs anymore and that senior discounts will eventually all add up over time and appreciating every bite of tasty food on your plate.

He knew aging always meant worrying about your kids and grandkids, no matter what, and trying to remind them that it will remain a constant in your life until you are no longer with them. It’s knowing in your heart that they love you and to treasure every “I love you” on the phone or in person.  It was also understanding why your kids may have a hard time as you age because they were afraid of losing you and never knew if the next “I love you” might be the last.  But when it came down to the end, he left this world surrounded by the family he loved and who loved him----there was never any question about it.

During the last few years of Tom’s life there were many changes. He took a lot of pills prescribed by his doctors to help him with various ailments. He slept more, lost some of his hearing and moved sround a little slower. But when he looked back at his life at 84 it was not so much about what time had done to him, but what he had done with his time.

Tom Wurdock’s talents are only exceeded by his humility.  When he looked around him he saw a life well lived and a life well-loved surrounded by a world he has shaped by helping others and by confronting whatever life threw at him with courage.  And it is important to note that almost fifty nine of them were spent married to the same sweet, kind, and beautiful, tolerant, funny and loving woman; his wife Dian.

He realized the great fortune of a long marriage, has left a legacy as a father and has lived long enough to experience the joy of being a grandfather. He has generously shared himself with so many of us and it’s not just those who gather at his passing who celebrate his life.  It’s also been with an extended family, the hundreds of students he taught, the community he’s helped shape, a wide circle of friends he’s watched grow, his long-time church that’s been a symbol of faith. He will miss his poker buddies, fishing pals, email lists and so many more of you. Through them all, he has gently and quietly left his unique and indelible mark on this world.

One of his greatest loves was vacationing deep in the woods in the Upper Peninsula of Michigan. This was where the family spent time every year with their best friends of 60 years, the Ronald May family, at the family cabin on Muskallonge Lake north of Newberry. They fished, played poker, preserved the beloved cabin, led the family on adventures and built things others could only dream about. Another love was the family cottage in Delavan, Wisconsin, where his building expertise was always in action and making continuous improvements on the 100+year old ancestral home. He could fix anything, knew something about everything and never met a New York Times Crossword puzzle he could not conquer.

Though it was hard to see his health decline over the past few years he never lost his sense of humor or kind and gentle attitude toward others. He knew he was loved by his family and his family knew they were loved by him. He respected you even if he didn’t agree with you and he will be remembered most by his ability to instantly make people feel like they mattered. He will continue to be part of the daily life of his family in memory and spirit.

Thomas F. Wurdock, age 84, of Royal Oak, died May 31, 2015. He was born April 3, 1931 in Royal Oak to Carl and Edith Wurdock. Mr. Wurdock served in the U. S. Air Force and was a teacher in the Oak Park and Waterford school systems. Those left to cherish his memory are his wife of 59 years, Dian (Haskell); children, Steven of Ada, Deborah (Jeff) Jablonski of Troy and Peter (Christine) of Royal Oak; granddaughters, Alaina Weathers and Lauren (Jon) Krzeszak and brother, Robert (Gloria) of Dearborn. Memorial visitation Friday 1-8 p.m. at the Kinsey-Garrett Funeral Home, 420 S. Lafayette, Royal Oak. Memorial service Saturday 11:00 a.m. at the First United Methodist Church, 320 W. Seventh St., Royal Oak. In lieu of flowers, suggested memorials include the First United Methodist Church of Royal Oak and the Royal Oak Historical Society.
Posted by Vacation Publishing at 6:33 AM No comments: