Gordon Lightfoot's OTHER song about a sinking ship 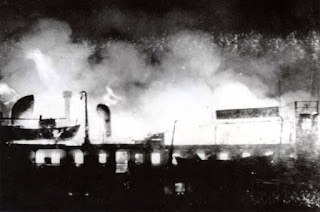 The Yarmouth Castle November 13, 1965
There’s been a lot of coverage these past few days (and rightly so) about the 40th anniversary of the sinking of the Edmund Fitzgerald. There is no question as to the enormity of this song and what it did for Gordon Lightfoot’s career. But it also took what was only a moderate news story at the time and brought it into almost every living room in the United States and Canada.

Prior to writing the Wreck of the Edmund Fitzgerald, Lightfoot already had numerous hits including songs like: If You Could Read My Mind, Beautiful, Sundown, Carefree Highway and many others. But what is much lesser known and even less talked about is Lightfoot’s first song about another doomed ship, the SS Yartmouth Castle, a cruise and cargo ship that sank 50 years ago today, November 13, 1965.

Lightfoot recorded five albums on the United Artists" label before signing with Warner Brothers, where his success skyrocketed in the 1970s. In his first nautically themed song, The Ballad of  Yartmouth Castle, (Sunday Concert, 1969, recorded live but never in the studio) he describes a true to life event in the same, folk-style, song structure using a repetitive melody, like he used in the song about the Fitz.  To me, the lyrics are just as haunting as those he wrote for The Wreck of the Edmund Fitzgerald—and in some ways more haunting as the story is told. Excerpts follow:

Now the many years she's been to sea, she's seen the better times
She gives a groan of protest as they cast away her lines.
And the grumble of her engines and the rust along her spine
Tells the Castle she's too old to be sailing.

There were tales of both courage and cowardice among the crew of the SS Yarmouth Castle. Many fled the ship without helping the passengers. Others pulled passengers from the windows of their cabins and directed them to rope ladders on the side of the ship. Some crew members had to physically throw weak and panic-stricken people off the side of the ship, away from the spreading flames.  Many people broke portholes and jumped into the sea while most of the lifeboats would not operate because the lines were painted over and jammed the winches. Even the captain abandoned ship without calling for help.

There was plenty of blame to go around for the tragedy but unlike the Fitzgerald, there was no mystery surrounding it.  The absence of sprinklers in Room 610, where the fire started was a huge contributor to the disaster. It was a room that wasn’t used for passengers because it was located directly above the boiler room.  Mattresses had been stacked improperly close to the ceiling light, which started the fire. There was also too much paint on the walls, including a fresh coat that hadn’t yet dried during the last voyage creating a flammable skin on the ship, a major catalyst for the spreading fire.

All amidships, oh she's blazing now, it's spreading fore and aft
The people are a-scrambling as the fire blocks their path
The evil smoke surrounds them and they're falling in their tracks
And the captain in his lifeboat is a-leaving.

At 77 years of age, Lightfoot’s voice is noticeably weaker than it once was but the Fitzgerald ballad remains as popular as ever in his concerts and on the radio while The Ballad of Yarmouth Castle is a great tune that has faded into obscurity.  His booming, vibrato baritone voice doesn’t have the same depth it did during his peak years on the charts, but who cares? Lightfoot gave us great, meaningful music and an amazing tribute to the crew of the Fitz as the song commemorated the tragedy. Unfortunately it never hit #1 on the Billboard charts and peaked at #2. The song that kept him out of the #1? Disco Duck by Rick Dees.  Thanks a lot Rick.

The fire on the SS Yarmouth Castle was so intense the ship’s hull was glowing red and the sea water was boiling all around it. Ninety people perished in the accident, most of the survivors were picked up by a ship called Bahama Star that noticed the Yarmouth Castle slowing down and then disappearing from their radar as she burned. The ship was not required to conform to American safety regulations since it was registered under the Panamanian flag and the loss of the ship prompted new and stricter safety laws on the high seas.

The Ballad of Yarmouth Castle is an obscure gem by Lightfoot, obviously overshadowed by the success of the song about the Fitz, but his 1969 recording is still worth the listen and Lightfoot ends the ballad with this haunting description of what happened 50 years ago.

Oh the Yarmouth Castle's moaning, she's crying like a child
You can hear her if you listen above the roar so wild.
Is she crying for the ones who lie, within her molten sides or crying for herself, I'm a-wondering.

But the living soon were rescued, the ones who lived to tell
And from the Star they watched her as she died there in the swells.
Like a toy ship on a millpond she burned all through the night
Then slipped beneath the waves in the morning.

https://www.google.com/?gws_rd=ssl#q=gordon+lightfoot+ballad+of+yarmouth+castle
Posted by Vacation Publishing at 4:25 AM No comments:

Do you want to know what makes for a good day of grouse hunting? Getting up before 6 AM and hitting the road north, with one of your oldest and best friends. The miles fly by as strong, fresh, coffee ignites spirited conversations while you discuss youth, aging and the life choices you made which are spiked with both laughter and melancholy.

Hunting thunder chickens is a tough task; you don’t bait a pile and wait. You seek them out between the woods, streams, fields and shadows and rely on your most primal senses of sight and sound. If you’re lucky you get a few shots off. It you are good, you plug a few birds. But even if the best shot of the day is from your camera, it is still a great experience as mine was yesterday.


To me, this photo illustrates a human life. It began as a seed and in its early years it grows steady and strong. The branches represent the different pathways our lives take and through this delicate cycle, the irony to me is that the oldest part of the tree provides the support to sustain the newer, always fragile life. 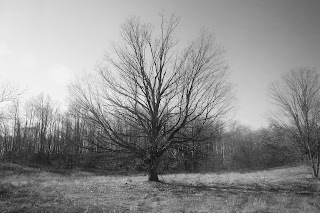 Posted by Vacation Publishing at 11:28 AM No comments: