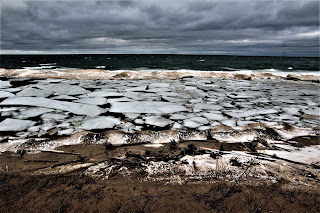 This picture was taken from the grassy bluff, at the bend down the road.

The ice that remains on Lake Superior looks like a giant, bobbing puzzle that no one on earth could ever put back together.

Looking down from the bluff, I can relate to the feeling of brokenness, as one of my closest friends is entering hospice care.

If Lake Superior was a heart, this would be mine right now.

Kevin Collard is one of the wittiest and most creative people I know. He has accepted his terminal diagnosis and is taking his life in stride. Just yesterday he posted:

“So the doctor says you have weeks to live, then Saturday they steal an hour of it? I can’t catch a break.”

Kevin has been like the Babylon Bee before it existed. His clean, adult friendly political humor has been his subtle trademark over the years. His mother used to say this about Kevin’s humor: “You’re not smart funny or cute.” The thing is, he loved and respected his mother and proved her wrong all the time. 

I agree with her on only one point. He is NOT cute, not since like the 1976 or 77 Collard family album at least.

Kevin worked as a radio producer at WJR and other stations working with and producing shows for David Newman, Mitch Albom, Frank Beckman, Paul W. Smith, Ken Calvert, Foster Braun and many other classic WJR on air personalities as well as spending many years in Christian radio.

From my personal recent, “Best of Kevin

“Hospital observations: nothings better than a cold, fresh breeze on the backside of your hospital gown...”

“Hospital observations: it’s weird that the term "discharge" can have a positive meaning...”

Kevin will quickly dismiss any accolades given or implied about his success because in his eyes, all the glory belongs to God.

He has accepted that the end is near and does not want fanfare as he prepares to leave the world. He is standing up to the blow that fate has struck upon him and is loved and cherished by his family.

And still poked at by his friends.

Kevin admits he has always been a little chunky and that is the reason why he stopped wearing Speedos. This inoperable cancer is finally giving him the crash weight loss he has wanted for the last 20 years.

“Dang, bro, the timing for my massive weight loss is off.”

“I just gave my Speedos to Goodwill because they wouldn’t let me sell them on Ebay. Goodwill gave them back."

In his work he has seen some interesting parts of the world. He has met most of his Detroit sports heroes. And as a music enthusiast he has met or interviewed all of the “who’s who” of Christian bands and artists over the last 30 years.

During a rough patch of my life he took me to see Gordon Lightfoot at Meadowbrook and bought me a steak dinner along the way. Kevin is one of three people who have been successful at talking me down from the ledge when I needed it. His encouragement has always had a way of getting me going again.

With this recent diagnosis, Kevin never had a chance to put up what most people call “a courageous fight,” because by the time the cancer was discovered it was too advanced for a transplant or chemo.

As I write, I have my crack staff of illustrators working on what will be the ultimate caricature of him as the new face of courage.

I feel lost and it sucks. I don’t know what I am supposed to learn from this other than what I already know; which is that each day is a gift.

And it is a gift knowing that Kevin has been given the knowledge of God’s saving grace.

I’m not ready for this Kevin.

But because of you I will take more chances. I will make an effort to be a better person. I will tell beautiful women how I feel about them; and who knows? LOL

I will take better care of myself. (probably)

I will tell people I love them more than I do now. (that’s easy)

I will work harder and better on everything I attempt.

I will finish what I started; (eventually.)

I will not wear Speedos in public.

I will not wear Speedos at home.

I will not wear Speedos, or eat old Doritos

I will succeed at things I never thought possible and remember your encouragement.

I will try to be freaking brave.

I will not care what anyone thinks, within reason of course.

I will remember how you love sunsets and Stryper.

I will swing and I will miss.

I will reread many of the emails we’ve sent to each other and laugh my ass off when I scroll back on facebook over the last 10 years.

I will continue to treasure our friendship.

And I will carry the best part of it with me after you’re gone.

But one thing I can’t do right now is hold back the tears as I prepare to say goodbye.

Posted by Vacation Publishing at 5:07 PM No comments: 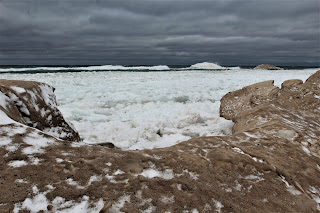 You can’t haggle with Mother Nature. Yesterday we lost most of our snow, but today we gained a month’s worth of wind.

This picture was taken three hours ago. The waves were thrashing the beautiful shoreline of Lake Superior without shame. The complex layers of ice, snow and sand were on display and this photo doesn’t do justice to what you can see this time of year.

The one of a kind sculptures that took three months to create are summoning attention for the last time. Most of the ice shelf is gone, but frozen moguls hug the shoreline as far as you can see, and a few late season icebergs are trying to stand their ground further out.

I am standing on about a six foot mogul about ten feet from shore and estimate the berg to be about a hundred and fifty yards out and fifteen feet above the surface of the lake. The water between us is churning with ice chunks the size of footballs and better.

It was a rush to experience so much weather in such a short amount of time. I am back on Muskallonge Lake now. It is warm, peaceful and serene and Jack and Needa seem satisfied after a long day of listening to me telling them what to do.  🙂

Meanwhile, three hundred yards and over the ridge to my back, *Lake Superior sings in the rooms of her ice-water mansion.

Posted by Vacation Publishing at 5:40 PM No comments:

LIfe between the lakes, part 30 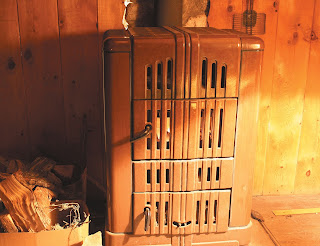 Life between the lakes, part 30

It’s actually part 31, as I realized I messed up sometime in February. So the “semi milestone” of 30 parts in 3 months came and went without anybody knowing.

Now, back to our regularly scheduled program, already in progress.

It was so quiet on Thursday night that while walking the dogs I heard a rush of wind from my right cross the road inches behind me. I stopped to listen and heard the tunneled, wind pattern, zigzag its way through the trees and out to the lake where it was gone. Jack and Needa were not particularly impressed by this simple occurrence and Jack lifted his leg in the wake of the wind.

Deer Park is still stuck in a freeze, but we have temps in the 40s beginning on Monday so the great melt of 2021 will begin.

Muskallonge Lake is still a solid mass of ice but that will change this week. I am bummed that the ice has been snow covered since I got here because one of my goals was to skate around the lake. It would be about a six mile trip but I know I could have done it.

Muskallonge is about 2 miles wide and 1 mile across.  Several years ago my brother and I were visiting family in Crystal Falls (western UP) in the early part of winter with other family members. We made a trip to Deer Park on a whim. There was no snow on the ground, and we were able to drive back to the cabin.

A few of us decided to stay overnight while the others rented a place at Deer Park Lodge. We stoked the wood stove for several hours, hung blankets from the rafters of the room we were staying in and started to get the temps up to a semi-comfortable level if you kept your coat on.

Of course in the morning it was colder than a witch’s thorax. We walked out onto the lake and my brother drove a golf ball farther than I’ve ever seen one hit before. He got the club member bounce on the frozen lake and he had to have hit it 500-1000 yards or more.

There was a rumor in the spring that a young boy from Port Huron found the Titleist over a mile away at Muskallonge Lake State Park and tapped it in the hole for a quintuple-eagle. Since this was the day before cell phones and cameras, we have to take his word.

The fake thaw we had last weekend turned County Road 407 into a bumpy, four- inch- deep- ice road between the house and Cranberry Lake where the grade is lower. The paved roads are clear of any snow or ice. Luckily, my brother Steve gave me a pair of grippers which have helped tremendously these past two weeks.

I heard a new bird call today and expect to hear more tomorrow when the temperatures rise. The coyote is nervously pacing, the fox I’ve been trying to photograph is acting sly. The ravens are as loud and the bears are about to wake up from their frigid, north woods slumber.

Muskallonge has been screeching all day with late season snowmobiles, having what may be their final, Adrenalin charged race across around the lake. I think the end of the season is really sinking in for people. I know it is for me.

The night sky remains clear and bright and the AM radio stations I have been pulling in continues to bring both mystery and suspense from those faraway places with strange sounding names are beckoning me to be adventuresome and spend more time outside.

Posted by Vacation Publishing at 5:34 PM No comments: