Life between the lakes, part 29 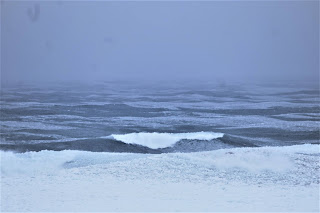 And just like that, Mother Nature told the Upper Peninsula: “not so fast.”

This past Sunday, Deer Park hit 40 degrees. The puddles on the road were enormous. Most averaged 30 feet by 10 feet in the low spots and the snow melt covered the top of my boots. But later that night we had a massive freeze and the high winds were the proverbial punch in the gut to our wish for an early spring.

It was 10 degrees on Monday morning. Everything froze again and there is now a three inch distance between the bottom of my feet and the top of the road. That is twice the amount of most ice rinks in the NHL.

On Monday, the weather authorities issued a flood warning for Luce and Alger counties with 10-14 foot waves recorded from Munising to Whitefish Point. So naturally, I had to see it for myself.

The waves crashed into the ice shelf, shifting this late winter charge into full gear. This photo shows the massive swells of the incoming waves taken with a telephoto lens, about a quarter of a mile out from Deer Park.

The edge of the ice shelf is between 5-10 feet high so my guess is that the waves would have been closer to 20 feet had they reached the shore.

I walked down to the big lake at another access point but it was brutal and I couldn’t stay there long. The wind made my eyes water and despite a thick hoodie and my winter jacket, my extremities felt the cold as the constant wind chill seeped through the fabric.

With the recent thaw, the three feet of snow on the ground went down to two feet, creating a hard crusty top that I could walk over for the most part. Walking anywhere around here is a crap shoot because the sun can give you a false sense of how heavy the snow might be that you are aiming to walk through.

If I were to try to spruce this picture up or try to add color, I would be failing to portray what the conditions were really like. Lake Superior is punishing in both the winter and summer.

Yesterday, I posted a video of what was going on in the yard. There were snow tornadoes along with blowing and drifting that measured up to my neck. The wind was so strong, accumulating snow was coming in under the door but it finally subsided by nightfall.

The moon was nowhere to be found and last night I heard a coyote howling outside my window. It wasn’t frightening, it was cool! I only heard one (not a pack) it consisted of short howls that would rise and fall in pitch, punctuated with staccato yips, yaps, and barks. If I feel there is a pack forming I will go back to carrying my side arm on walks, but I don’t think this is the case.

This morning I saw the neighborhood fox out on the lake during our morning mile. I was hoping he would pass through the yard again but he had ventured elsewhere by the time we turned around and came home.

I am still without my Jeep, so exploring has been limited. Finding the part I need and GETTING the part I need are two different things. As I’ve mentioned before, many things just take longer around here and I am getting used to it.

I’ve not done much writing these past two weeks except for what I have posted here. It seems I have hit a temporary funk.

I am trying to use the time to revisit the second volume of short stories I’ve written since “Bending Water and stories Nearby” and hope to have it released by the end of the year, either with a publisher or by myself.

Publishers tell me that short story anthologies don’t sell, but I don’t believe them. Then again, I’ve never worried to seriously about book sales because interacting with people and leaving something behind is far more important to me than royalties.

There is a communications tower about four miles south of me and even though I hate how it has changed the horizon, I accept how its presence is necessary and permanent. Tonight it is making a point to wink at me through the flurries; hopefully a signal that everything is going to be alright.

Posted by Vacation Publishing at 10:50 AM