Life between the lakes, part 28 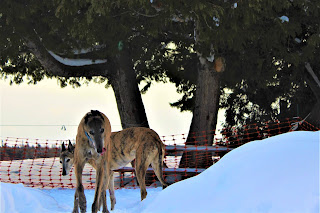 To try and recap what the weather was like in Deer Park over this past week I would say it was a veritable cornucopia of random weather patterns, and massive cloud banks, ascending and descending.  Then Mother Nature teased us and tossed us back and forth with her display of strength and power.

For a while, the muted roar from the big lake make it sound like a long freight train was constantly moving in the distance over the ridge that separates me from Superior. Some nights were dead calm and quiet while one night I could barely open my door because of gale force winds that created chest-high snow drifts in the yard.

Earlier in the week the clear and quiet nights provided excellent stargazing until Thursday, when a full moon appeared and resembled the biggest and brightest balloon you’d ever see in the middle of Muskallonge Lake.

The luster of the moon was intense and illuminated our evening walk so much that I didn’t need my head lamp.  The snow reflected the moonlight making it possible to see long distances, where I have memorized every bend and bump in the road over these last three months.

There is always a trade off when you are gazing at the night sky up here. You can either love the moon and how it lights up the forest around you or you wait for the pitch black nights as you see the milky-way form. It is magical thing to watch as it becomes a vast, detailed cotton like swath that is draped over Lake Superior like a delicate ribbon of light with millions of holes punched in it.

Both scenarios are awesome to me and I’ve learned that sometimes I can often have it both ways up here. A couple days ago during our evening walk, the stars and planets looked like shiny white marbles in the sky. They were like frozen pearls delicately arranged in my own planetarium.

The full moon and warmer temperatures brought a thaw allowing some of the wildlife to emerge. On Thursday there were enough fox prints in the yard to make me think they were having a convention. The larger coyote prints had a new presence as well and it looks like the first deer emerged down the road to check out Cranberry Lake.

On Saturday morning I watched a red fox make his way through the yard and down the shoreline, likely in pursuit of some of the red squirrels I saw earlier.  Unfortunately the trail-cam (that I just wrote a glowing review about on Amazon) stopped working. I have a suspicion that it gave up the ghost about a month ago when I had it on top of a hill to watch a fox hole and our temps were -20 and even colder with the wind chill.

When Friday night arrived the wind was gusting, howling and screeching and testing the limits of the crooked cedars and white pines in the yard.  I struggled with the door and when prompted to go out, but finally got it open. Jack and Needa turned back and gave me the “you’ve got to be kidding” look.

This morning I saw something I have never seen over the lake this winter; fog. Yesterday was the warmest day we've had so far. This ground-hugging cloud was visible for a couple of hours as the sun rose through a thin cloud base, with delicately woven blue and pink streaks.

So, to sum it up; Tiger Jack Burke and Needa continue to remain content living with me under these conditions. Needa is more prone to running through the snow tunnel in our yard and trying to get Jack to join in. But Jack is all business when he is out there, doing his business.

We completed our afternoon mile in a light rain that has now turned into a light snow. Jack and Needa enjoyed an extra helping of chicken breast and broth in their kibble. They are now sawing logs in a food coma at my feet and we continue to watch the marvels of Deer Park unfold by the hour.

Posted by Vacation Publishing at 10:46 AM