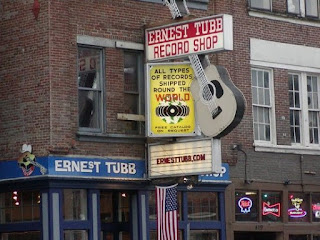 Twenty years ago yesterday I packed up my car and headed to Nashville, TN with $800 in my pocket to try and break into a new level of the music business and find something meaningful.  It was the night of Elvis’s birthday when I arrived and I had already secured a place to live after meeting and getting to know a musician from my numerous business trips to Nashville the prior year.
We lived in a dump on 29th Avenue North. Actually, to call it a dump was an insult to the city dumps we know, but you get the idea and my roommate made our affordable place a home through his fine taste in décor including the decoupage toilet that I’ll never forget.  Upon my arrival he took me to one of the hot spots for songwriters where we had a few drinks before we went home to enjoy his Italian meatloaf.
I moved to Nashville after making trips there every month during 1996 as I met with industry leaders and up and comers. Nearly everyone told me it would take years to break into the industry so I armed myself with a “who’s who decision makers” directory and started making phone calls and writing letters.
After about two months of little success I landed a job with the top film production company that produced music videos for the stars. Though the job was only 4 days I made enough money to last another month and a half and kept writing letters. Everyone was friendly and welcoming, which was a stark contrast to dealing with industry people in New York and LA. . I knew I was getting closer to something when Garth Brook’s manager called me. It wasn’t to offer me a job but to compliment me for the letters I was writing. After receiving their form letter of rejection I wrote back to tell them I “wasn’t accepting rejection letters at this time.” I was lauded for my approach and told something would give for me soon.

I finally got a job as a bonafied record promoter, promoting music of the stars to country radio stations.  This brought me closer into the fold of record executives and recording artists. In Nashville it wasn’t uncommon to see the stars of the day and label executives at the diner or anyplace on Music Row. One time I was at a songwriter’s night at an intimate room sitting next to Tom Wopat, who along with his TV cousin John Schneider was an accomplished songwriter. We sipped longnecks and kibitzed about life between the performances until finally one of the songwriters spotted him and started making jokes at his expense about the Dukes of Hazzard.

Tom didn’t say anything and being several beers into the night I got a little miffed because I thought the writers were disrespecting him. He didn’t say a word and I could not decipher if the head shaking and grin on his face was him trying to shake it off or something else. Suddenly I envisioned that Dukes of Hazzard episode when the Duke Boys got into a barroom brawl. You know, the one where Boss Hog was up to something shady? Ok . . . I know . . . it happened in every episode.  I honestly thought for a minute that he would need my help because he was outnumbered three songwriters to one, so I leaned over to him and said something like “If this turns ugly I’ll take the one on the right and you take the one on the left.” I was ready for an old fashioned Duke Boy rumble.

But at that moment one of the songwriters said “We’ve got a special guest who’s going to join us and you know who he is because we’ve been making fun at his expense all night. Ladies and gentleman please welcome our good friend Tom Wopat!  He took the stage and I breathed a sigh of relief..

I had many laughs in Nashville and many experiences with famous country singers but in the end when I lost my job as a record promoter I didn’t know it at the time but it was the best thing that could have happened to me because in truth, with the exception of very few artists I was promoting records for (Vince Gill, newcomer Leann Rimes and a couple others) the rest of them were a term a friend of mine had coined earlier; NTB. . .which stood for “no talent bum.” I almost got a job at MCA Records and working for a publishing company but they didn’t pan out. I wonder now what course my life would have taken if I had remained there but when I returned to Michigan I partnered with my friend, who has gone on to have an incredible career as a writer, performer, and cancer activist. Even Bruce Springsteen became a fan and recorded with him a few years back.
But without a doubt the greatest thing that happened to me in Nashville was working with my friend Eddie Mugavero. Folks, I kid you not, Eddie is one of the greatest songwriters of this generation. Known largely for his success with western swing, his ability to craft songs is on par with George Gershwin, Jerome Kern, Cole Porter, Richard Rogers and Lorenz Hart and another band from Liverpool who had a few hits. I’ve always wanted to write a musical with his tunes. It would be a modern day Grease and South Pacific rolled into one
While the other black hat tippin’, belt buckle wearin’ George Straight wannabes were writing more songs that rhymed the words “love” and “thinking of,” Eddie was and still is running circles around them with clever lyrics and melodies that demonstrate his mastering of the craft along with a unique musical acumen rarely found.  Hell, I think he once wrote a song where he rhymed the word “orange” with something. He takes the best part of a bygone era and crafts songs with a 21st century flair that is beautiful, funny, catchy flowing and eloquent.

We’ve remained in tough through email and facebook and it’s hard to believe 20 years have passed. Eddie is an amazing dude and a pretty good table hockey player. We once had a tournament that lasted seven games and went into double overtime until he finally beat me with seconds remaining. He’s also a Yankee fan, but I don’t hold that against him. If you love music you should follow him on facebook and at very least check out his web page.

Anyway, that was my “20 years ago today” time capsule. Thanks for listening. Friendship is an amazing thing. Swing ya later Mugavero!

www.eddiemugavero.com
Posted by Vacation Publishing at 6:03 AM No comments: