Life between the lakes, part 12 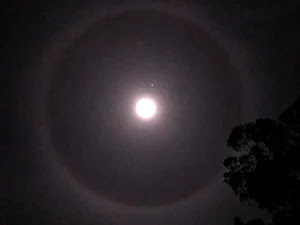 Life between the lakes, part 12

End of the year, potpourri edition.

The snow has stopped in Deer Park; at least for now. Lake Superior looks like a horizon of slush as the freeze point is closing in on the shoreline.

Meanwhile, the snow coverage on Muskallonge Lake is now quite impressive and the amount of snowmobiles has quadrupled in the last 2 days. I see them on the lake and they pass us on the road. There is something in the mechanism that reminds Tiger Jack Burke and Needa of the mechanical bunny at the track because their ears shoot up and they bark when a sled comes by.

Two nights ago a “moon halo” appeared. This optical phenomenon occurs when the moonlight is refracted in millions of hexagonal ice crystals suspended in the atmosphere. It was pretty awesome.

I know a guy who works in the State Park down the road and yesterday we chatted. He has a great sense of humor and when I asked him if anything exciting was happening over New Year’s weekend he thought for a moment, grinned and said the only excitement might be when they’d ignite the burn pile.

I am considering of spending my New Year’s Eve with a traditional Yooper seven course meal.

It will consist of a six pack and a pasty.

Posted by Vacation Publishing at 1:40 PM