Life between the lakes, part 14 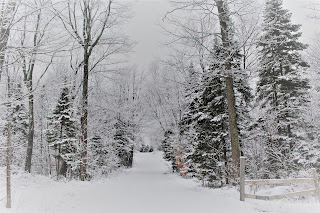 Deer Park has been home to more than its fair share of sunlight two of the last four days. There were two incredibly sunny days sandwiched between two overcast days. The roads have been great and there has not been a single complaint issued by anyone about the sun.
The night sky has been clear, which has made for some amazing stargazing. I wish I could explain to you how different the constellations in the sky switch places and play hide and seek in the winter months, but I’ll keep trying and observing.
On Friday, the drive to town was 30 minutes. Last week the average drive was the better part of an hour. The local weather folks are calling what we have a “snow drought.” Look, I know I am not a lifelong Yooper but even I can feel the weather pattern doing a slow but aggressive turn. Something is brewing in the skies.
Last night we had a light dusting snow and this morning it was like God took a can of white spray paint and covered all the trees. There were a lot of fresh animal tracks on our morning and afternoon walks but still no major sightings.
Tonight it is calm, quiet and peaceful. It is a great feeling being in a place where I don’t always have to know what is going on or get consumed with anything other than what is in front of me at this moment.
As I stepped outside to check on the stars, the only sound I heard was a plane passing overhead, traveling to a destination which will remain unknown to me. And I’m OK with that.
Posted by Vacation Publishing at 6:58 PM