That's me and my Dad, as I planted my feet in the Upper Peninsula of Michigan for the first time.
People often ask me about how my fascination with the Upper Peninsula began and why the UP has become such a big part of my life.
It’s a bit of a long story, but here goes. 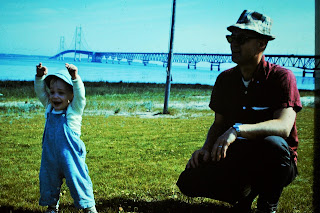 In the fall of 1949, my mother, Dian (Haskell) Wurdock began college at McMurray College for Women in Jacksonville, Illinois. She was assigned a roommate, Ray (Carlson) May, who was from Lombard, Illinois.
These two young women hit it off immediately and ended up being roommates for their entire stay at MacMurray. No surprise; they remained best friends for life.
In 1954 Rae married Ron May. When Dad met Ron for the first time, the two laughed out loud because they were both wearing the exact same double-breasted blue suits. These men would remain best friends their entire lives.
But it really all started with a sneeze.
Rae’s father Dr. Albert Carlson, DDS began his dental practice in 1925 in Lombard, IL and it spanned 40 years. He was one of six Soldiers assigned to the Observation Corps who survived the Meuse Argonne drive that ended World War I.
In the 1930s air conditioning was not common. Dr. Carlson’s hay fever was so bad that after the advice of a friend, he sought relief in the Upper Peninsula and found it. While on Big Manistique Lake he saw a log cabin he loved. He bought property on nearby Muskallonge Lake and used the same cabin builder to build his own dream cabin, modeled after the one he admired.
Dr. Carlson (Papa) was an incredibly humble and generous man. Nobody in Lombard who needed dental work went without it. He would take chickens, eggs, or fresh cow’s milk as payment for his professional services when money could not be found.
Many could not pay.
Over the course of two summers in the late 1930s, Papa brought several men from Lombard to assist the cabin builder. This not only erased their debts but they spent as much time enjoying the outdoors as they did building the cabin with the Finnish cabin builder Papa hired.
Rae continued to cabin life as a little girl and after she got married, she and her husband invited my parents to join them on Muskallonge for a week and a new tradition began.
Though I am not a blood relative to Papa, I’ve been lucky enough to be thought of as such with branches of his family my entire life. This is proof of how life has a funny way of connecting people and small events in significant ways.
Since 1958, our families have vacationed together almost every summer and though the second generation is gone, the next generation continues to gather almost every summer.
In a conversation with my sister earlier this year, we discussed my growing desire to eventually move to the Upper Peninsula of Michigan.
Her reply was something like: “You’ve been wanting to live up there since you were five years old!”
It was a relief to hear that from her because I didn’t know how she would take my news. Now, fifty years later I am proof that dreams come true
I wrote my first book about the Upper Peninsula (Places I Hide) in 2008 and released a short story anthology (Bending Water and Stories Nearby) in 2013. I’ve written dozens of essays and posted dozens of photos ever since winning the first Detroit News and Free Press “Celebrate Michigan Photo Contest” in 2008.
So here I am. I’m finally living in the Upper Peninsula, temporarily residing in the guest cottage of a friend on Muskallonge Lake until I find a house in town. Each day in Deer Park is an adventure.
I hope you will enjoy reading about it as much as I enjoy living it
Posted by Vacation Publishing at 5:26 PM