Life between the lakes, part 6 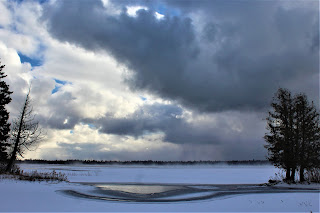 Life between the lakes, part 6

Today the weather in Deer Park was nothing short of interesting.

Snow flurries came in from the north and south and east and west, while Muskallonge Lake played a game of hide and go seek with the sun between the squalls.

There was not much accumulation but the snow literally blew in every direction, except toward the sun. This went on for several hours until it fell so gently it was like it was moving in slow motion.

This was taken just down the road. Muskallonge Lake is spring-fed and that is the only explanation I have for the skip of open water pictured.

It's either that or a meteor hit and nobody told me about it.

Posted by Vacation Publishing at 6:21 PM