Life between the lakes part 5 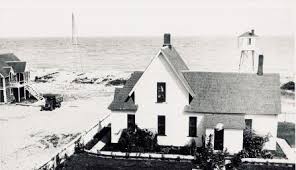 Life between the Lakes, part 5

On this morning’s walk, I heard what Thomas McGuane might call “the longest silence.”

When I reached Lake Superior the waves were slow and vast. It sounded like a Giant had rolled over on its side and fallen asleep facing the shoreline.

The sky was overcast all day. The windsock occasionally fluttered while behind it, the rowboat accepted that it was now upside down at the base of two jack pines.

Deer Park, Michigan is not recognized as a current location by the state of Michigan but many locals still call it by its name. It was a logging community in the late 1800s and at its peak was home to about 400 people. It had a post office, a school, probably a saloon, and the lumber mill.

A series of narrow gauge railroads connected the regional lumber camps and brought timber to Muskallonge Lake, which was the holding pond as the wood softened before making its way to the mill. This was in the 1890s and the workers produced an astounding 16,000 board feet every 24 hours.

When the trees were gone, so were the people. The railroads shut down and pulled up their tracks by about 1905. Today a huge pile of sawdust is all that remains at the sight of the mill and a well-trained eye can trace the path of the abandoned railroad.

Muskallonge Lake is about 30 feet to my right and Lake Superior is about 300 yards to my left. In addition to the mill, Deer Park had a lifesaving station and the foundations of the buildings can still be found.

Deer Park is the heart of the region known as “shipwreck coast,” situated between Whitefish Point and Munising.

Many lives were lost as ships vanished in Lake Superior throughout this region.  In 1892 the SS Western Reserve sank with all hands about 35 miles Northwest of Deer Park and the steamer Cypress, sank in 1905 just 8 miles out, within sight of the lifesaving station. Only one of the crew of 24 survived. He washed up on shore at the end of the road I’m on and lived to reluctantly tell his tale of horror.

In 2007 while searching for a different wreck, the SS D.M Clemson, explorers found the Cypress in about 400 feet of water straight out from Deer Park. Amazingly the hull was completely intact, which was surprising because of the violent nature of the storm that took her.  Her name and port of call remain completely legible on her stern.

So here I am. I’m in a cottage on my favorite lake getting ready for winter in a place where the average yearly snowfall total is just over 100 inches. A week ago I had doubts about making the move to the UP, but the simple fact that I had a productive week writing has quelled those worries, at least for now.

I’ve written more in the past seven days than I have in the last year and a half. Living in this temporary setting, I know it will be hard to leave when the day comes.

The dogs are content and sleeping comfortably after their afternoon walk and “early bird” senior citizen dinner about three hours ago.  If there was someplace else I could be right now, I don’t think I could tell you where it was.

Posted by Vacation Publishing at 6:13 PM