Life between the Lakes, part 42 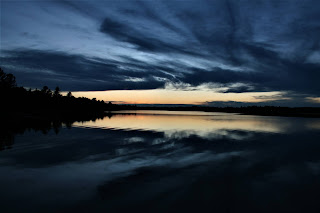 There has been an increasing number of flying fish over Muskallonge Lake since the spring thaw. This is not a new species of fish, but rather the unlucky ones who end up in the talons of the Bald Eagles and Osprey.

From a distance, it’s easy to tell an eagle from other birds. While many of them fly by flapping their wings and going against the wind, the eagles appear to be the ones controlling the air. The way they rise, dip and glide above the tree line commands respect and leaves me in perpetual awe. But often I wonder if they take time to enjoy the view or are only on a constant search for food?

Trout season opened this weekend and currently, the folks at Pine Stump Junction are hosting a trout tournament, sponsored in part by Bells Brewery. The largest fish between now and next Saturday, May 1st, will be declared the winner. Please play fair. No stocked fish from lakes are allowed. Pine Stump also now has the Michigan lottery up and running. You can stop by and play Club Keno or to buy tickets for your favorite lotto games.

The Foster Camp at High Bridge on 407 was in full swing for the trout opener. As a kid I remember my Dad would always mention the great Ernest Hemingway as we crossed the Two Hearted River at High Bridge by their camp. And for years the story confused me and I thought Hemingway was the one who lived in the cabin you can see from the road. Oh, the sweet confusion of youth!

Fishing is on and live bait at Deer Park Lodge is back. They have crawlers, worms, spawn and wax but won’t be getting minnows for a while yet. The recent walleye survey of Muskallonge Lake was promising for anglers, showing significant growth in numbers for the mature adults. This week I got my fishing gear out of my storage area and hope to hit the water soon, though I am not sure exactly where just yet.

I walk my retired Greyhounds, Jack and Needa twice a day along County Road 407.  They always identify areas along the road where animals have crossed and Jack never misses an opportunity to lift his leg and mark a spot. I hear animals in the woods and sounds I cannot explain along this road. I’ve heard trees fall in the forest, when no one was there to hear them; thus answering the age old question.

In years past, the lake often looked the same to me every day but since the thaw, it changes every second. The water lapping on my feet today is the same water that I swam in as a kid, replenished by snow, rain, and underground springs and purified daily by God.

On Wednesday morning, during sunrise, there was a cloud-bank that resembled a chain of humpback whales, parked in mid-air over the south side of the sky. They played follow the leader, inching westward at their own pace.  At the same time, the blinking communications tower I can see on County Road 410 went from red to white and the yard became alive with winged movement as a new day was ushered in.

I could do many birds a favor by taking out the bully raven who hogs the bird feeder. But I won’t.

When he leaves the birds hiding in the trees rush to the feeder. Maybe they have an arrangement that I am not aware of? Maybe he protects the smaller birds from other prey, but I tend to doubt it. After all, every bird on earth has the same motive; survival.

Each day I am introduced to a new bird call and a new burst of color in the forest catches my eye. The birches seem whiter. The pines look a little greener and become more fragrant. Early ground cover is springing up all over the place along with the daffodils and crocus.

But I am greying. The faces of my dogs are turning white while the birds outside never seem to age.

Posted by Vacation Publishing at 4:25 PM