Life between the lakes, part 37 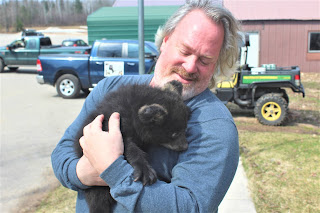 Yesterday I spent part of my afternoon with my new friend Dean Oswald. If you have ever been in the eastern part of the Upper Peninsula, you may have seen signs for his bear ranch, located just a few miles north of Newberry.

The ranch does not open until Memorial Day, but Aunt Carla knows everybody up here and Dean and Jewel are good friends. As a result we were able to arrange a visit to see the three new cubs at the ranch. I am pictured here with three month old “Peanut.” Dean told me he will be about sixty pounds in three months. Before you ask; yes, his claws were sharp.

When asked if he has ever had any close calls with any of the bears over the years, Dean’s reply was “only once.” One of them bit him on the hand when it was being fed. Evidently the impatient, hungry bear was not being fed fast enough for its liking.

I also learned a lot during our visit, such as how to spot a bear’s den in the woods (dugouts near fallen trees) what they will eat (everything) and how, unfortunately the bear population in Michigan has dramatically decreased because of the “powers that be” in Lansing calling all the shots.

The Oswald Bear Ranch is committed to the welfare of abused, neglected or orphaned bears by rescuing them from various harmful circumstances.  The bear ranch is also an educational facility that is dedicated to teaching youth about rescued cubs and the care needed to protect black bears and their environment.

Their long history of protecting a natural resource, the North American Black Bear, and managing the environment of the 240 acres rescue refuge has earned a 5 STAR rating by Conservationist!

Studying, documenting and interacting with their black bears for over three decades the Oswald’s have an unprecedented amount of knowledge in the understanding this unique creatures, and they generously share it with others.

Dean Oswald is a true hero. What he has done for the safety and welfare of the bears is extraordinary. If you are in the Newberry area this summer, make sure and stop by Oswald’s. It is a great family outing that is affordable and guaranteed to be memorable. You will not be disappointed.

And as a bonus, I will close with this brilliant poem by the great Jim Harrison. It makes me wonder why anyone would want to hunt a bear in Michigan.

My Friend the Bear

Down in the bone myth of the cellar of this farmhouse, behind the empty fruit jars the whole wall swings open to the room where I keep the bear.  There's a tunnel to the outside of the far wall that emerges in the lilac grove in the backyard but she rarely uses it, knowing there's no room

around her for a freewheeling bear.

She's not a dainty eater so once a day I shovel shit while she lopes in playful circles.

Privately she likes religion—from the bedroom I hear her incantatory moans and howls below me—and April 23rd, when I open the car trunk and whistle at midnight and she shoots up the tunnel, almost airborne when she meets the night.

We head north and her growls are less friendly as she scents the forest-above-the-road smell.  I release her where I found her as an orphan three

years ago, bawling against the dead carcass of her mother.  I let her go at the head of the gully leading down to the swamp, jumping free of her snarls and roars.

But each October 9th, one day before bear season she reappears at the cabin frightening the bird dogs.  We embrace ear to ear, her huge head on my shoulder, her breathing like a god's.

Posted by Vacation Publishing at 4:15 PM