Life between the lakes, part 41 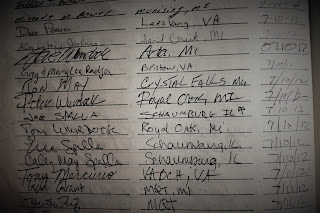 There are only two establishments that are consistently open and qualify as social stops between Deer Park and Newberry. The first is the famous Deer Park Lodge at the east end of Muskallonge Lake, which I have written about before. They offer cabin and boat rentals and have an amazing general store that can accommodate almost anything you need within reason. The second is another famous stop along County Road 407 called Pine Stump Junction.

Prior to the Drink Shack/Cookery that currently operates there, the history of pine stump is simple but fascinating. In the late 1800s, while many areas had post offices that were inside a saloon, store or other structure, Pine Stump was an unmanned post office while the “Rural Free Delivery (RFD) system was implemented.

Located in a remote part of the Upper Peninsula, the junction was marked by a huge pine stump with a big iron mailbox attached. The mail that arrived via-Newberry (the closest town about 20 miles to the south) was left in the box to be picked up by people from the camps along the Grand Marais-Paradise road that ran east-west and the Deer Park Road that ran north and south.

Seriously. I wonder how many love letters were intercepted in those days and how the absence of return mail impacted the lives of young adults. Think about it.

When the settlement of Deer Park was established they formed their own post office and the service between the two points continued as a north-route from Newberry to Lake Superior while the east-west route remained in place.

This week I went to Pine Stump to have a couple drinks and let someone else do the cooking for a change.  I sat at the bar and ordered a round and it wasn’t long before an older couple I knew from down the road came in, said hello and immediately began socializing. The wife sat down and began a conversation with the waitress/barmaid while her husband chatted with me. A few minutes later a group of men entered and sat down at one of the large tables.

When the waitress came to take their drink order my friend politely excused himself and walked toward the table.  I heard him ask if any of them were former military and could tell by the responses that some of them were. I heard him offer to buy them a drink as a small token of appreciation for their service to our country. They all sat and chatted for a while. I tip my hat to you Jim. You are a great American.

He returned to his wife’s table when their pizza arrived. I was at the bar so I turned around and formed a sociable triangle with them. Between the three of us and the waitress, the four of us chatted for a while about nothing in particular other than the, occasional power outages, the largest snowfall of the last 20 years and the way the northern lights can turn the sky from green to dark-red, to white before disappearing after their shimmering display of beauty is complete.

The bar/grill know as Pine Stump has gone through several owners during its existence. It has turned over three times in about the past ten years with each new owner bringing their own energy and visions for improvements and prosperity. It is a hotbed in the summer and offers occasional live entertainment.

The menu has also undergone some changes which have not been popular with  me and those who have taken my informal survey as well as insider information I gather during my stealthy recon missions. (Bring back the Jumbo Chicken Wings Rob, and make your pizza great again.)

I realize it is a difficult task to leverage a restaurant in the middle of nowhere. The food supply is limited and the rising cost of getting items from one place to the next can be staggering when you are trying to make payroll and post a profit, especially with the challenges of Covid.

They’ve been doing an incredible job at Pine Stump during the pandemic, especially during this year’s short and less profitable snowmobile season. I will continue to patronize this great place even if some of the items on the menu fall short of what my pallet desires. After all, the atmosphere cannot be beat!

In the old days, resorts, tourist attractions, hotels and places like this used to have guest books, where people signed in, putting a stamp on the arrival of their vacation. It was done mostly as formality and also because it was a fun thing for families to do. Pine Stump used to have and use them but the tradition seems to have become lost.

While I was there I went through some of the old guest books. Unfortunately, they skip around a bit and there are big chunks of time missing in the volumes. All of the entries were etched on the parchment, either in pencil, pen, magic marker or an occasional sharp crayon.

I found several entries from my family that occurred between 1989 and 2013. When I flipped through the pages, I saw what seemed like almost every city in Michigan but still managed to learn a few new locations.

There is something magical about this area. Whether you call it “up north,” or “the UP,” it holds a magic and beauty that is easy to recognize yet hard to define. Many people return to the area because they’ve never found another place like this. I believe them and I know why they return.

There are sacred family stories etched in these books with very few descriptive words. It doesn’t take much to create a lasting memory in these parts; just your name, your hometown and the date you were there.

Posted by Vacation Publishing at 6:19 PM