Life between the Lakes, part 40 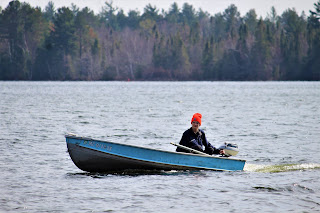 Muskallonge Lake had its first fisherman of the season last week. A teenager from St. Clair Shores got his Grandmother’s old Evenrude working and launched the Alumicraft into a chilly Muskallonge Lake.

Outboard issues plagued his three or four trips but the payoff came with the sweet smell of the gas/oil mix when the motor kicked in allowing him to glide across the otherwise empty lake and bring in a nice Northern Pike, which was caught and released.

Last week there were DNR personnel on the lake conducting a survey for Walleye to measure the natural reproduction of the fish after the fisheries completed some stocking a few years ago. I know a guy who took some beauties when the lake was frozen, so it is encouraging to see the continued growth and expansion of the population.

We had a lot of fog last weekend and on the afternoon walk with my dogs we heard a freighter passing the site of the old Deer Park Lifesaving Station blasting its horn. The fog on the big lake looked like a steam room set on high.

The freighters have what is known as “Restricted Visibility Sound Signals.” Regulations state that a power-driven vessel making way through the water must sound at intervals of not more than 2 minutes one prolonged blast.

A friend of mine who currently resides in Point Lookout near Au Gres on Lake Huron introduced me to an app called “Boat Watch.”  This app shows real time positions of ships on the great lakes, their names and what type of vessel they are. She alerts me when she sees a freighter and I make note to see if it is within my sight after its journey through the Soo Locks. With the shipping lanes reopened, the traffic on Lake Superior has been full speed ahead.

A few days later, snowflakes, the size of Kennedy half dollars, were dropping like lead as the precipitation on the radar stretched from Houghton to Sault Ste. Marie and northward and from Engadine halfway to Hudson Bay up in Canada.

When it comes to weather, Meteorologist Karl Bohnak has been my trusted source for as long as I can remember. I invented a game with family and friends surrounding his weather reports. After Mr. Bohnak gives his “exclusive radar forecast” everyone in the car guesses what the DJ will say at the end of his report. It is usually: “Thanks Karl,” “Thank you Karl,” “Thanks very much Karl,” “Thank you KB,” or any variation thereof.  I haven’t had a visitor since New Year’s Day and I was trailing 3-2 at that time.

Maybe I need to get our more.

The geese honk at my dogs and I on our morning walk and we routinely (but not intentionally) flush out ducks from the cover of Cranberry Lake on our afternoon mile. The other we witnessed  hundreds of earth worms committed suicide on CR 407 after the pavement ends in a muddy stretch of road.

The neighborhood ravens, whom I have named Mr. and Mrs. Evermore, seem to know we walk every day at three o’clock and squawk at us, hoping I will drop some scraps for them to eat. If I do, they are gone by the time we turn around for home. If I don’t, they badger me up and down the road. Sometimes this alerts a cluster of hawks who glide in slow circles above and follow us down the road. It is a great feeling to be so close to nature.

This was my week to get sick. I was impressed by the efficiency of the Gibson Family Clinic in Newberry, who tested me for Covid (I was negative) and began treating me for a case of bronchitis. Kudos to Aunt Carla who drove to town to pick up my prescriptions, which have improved my condition every day. In the meantime,

Tiger Jack Burke and Anita Wood (my greyhounds) have not missed their daily walks. I tell people that taking care of my greyhounds is like being a mail carrier in my variation of the mail carrier’s oath: "Neither Rain, Nor Snow, Nor Sleet, (we’ve had them all this week) Nor Dark Of Night (nor illness) Shall Stay These Couriers From The Swift Completion Of Their Appointed Rounds.

Life between the lakes assures me that living in the Upper Peninsula is never boring and nothing is ever predictable. Everything changes and evolves at God’s pace and we would be fools to try and pretend we know what is coming next.

Posted by Vacation Publishing at 3:44 PM