Life between the Lakes, part 43 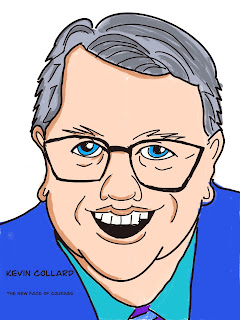 My good friend Kevin Collard passed away last night. And though I am here, still full of life, I feel a profound emptiness inside.
His illness came on rapidly and he quickly found himself accepting the inevitable. He had guts and courage, knowing his time was short and he approached death the only way he knew how; through his faith.
Kevin was the guy behind the scenes talk radio on WJR and Christian radio, going back to his high school days. He was a brilliant guy, full of great ideas and an incredible sense of humor.
In a world of friendship through social media, he was a true go-to friend to me, because our friendship was genuine.
While I mourn his loss I take joy in his deliverance. Please keep Kevin's family in your prayers.
Kevin was a graduate of Waterford Kettering High School (1985) and the Specs Howard School of Broadcast Arts (1986). He was a well-known radio producer in the Detroit metro area getting his start as the executive producer for Foster Braun’s “Love Talks” program at WWCM-Ypsilanti (1986-1993). He worked at WJR-Detroit from 1993 to 2009. He produced programs for Jimmy Barrett, Fat Bob Taylor, Larry Patton, Mike Whorf and Mitch Albom’s Sunday Sports Album. He was the executive producer for Ken Calvert, Paul W. Smith, David Newman, and Frank Beckman.
He later was the executive producer for Paul Edwards at WLQV-Detroit, Music Director and Morning Host at Proclaim FM in Toledo, Ohio, and Executive Producer for Stephen Clark & Joanne Purtan at WOMC-Detroit. He wrote the “Sounds of Faith” weekend column for the Oakland Press (1994-1996). In recent years he hosted a podcast, “A Soul Encountered,” interviewing guests about their Christian faith.
Posted by Vacation Publishing at 4:37 PM