Life between the lakes, part 44 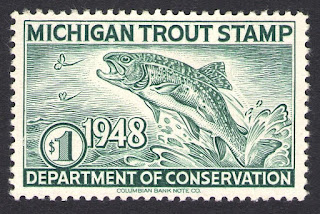 The water parts to form a small circle, revealing the Royal Coachman’s tacit arrival into the Two Hearted River. The fly bobs once and then rests silently on the clear, smooth surface. The fisherman stands in the mucky sand watching the circle of waves widen and run toward him on shore.

A small hidden line runs straight toward him while the current gently pulls the Coachman downstream as he slowly creates slack by pulling the line from his reel and then releasing it.

A brook trout circles the coachman leaving and returning again so fast that all that is seen is a reflection of him in a beam of sunlight. He looked long and girthy, and the man’s heart rate quickened.

The fist circles again with renewed intentions, this time swimming straight up without hesitation and taking the red and white hook into his mouth, creating a flurry of splashing water.

The game is on.

The thin line becomes instantly rigid. The man bites down on the lip of his pipe and exhales the last puff of sweet grey smoke he has been nursing for the last twenty minutes. The trout and Coachman swirl to the surface of the water and then dive. The man pulls back on his rod, telling the fish, “not so fast” as he draws him to the surface.

The fish has other plans and replies with a lunge downstream as the reel whines with the fisherman giving him some slack.

The brook trout dives again and darts toward the butt end of a log sticking up out of the river. Behind the log the trout creates a temporary flurry of white water, signaling to the man that the fight is about to ramp up. The man tightens his line and pulls it gently, keeping it taut.

The fish returns the favor by darting toward a cluster of brush jutting from the shoreline, causing the man to give away some line. The man tries to gain leverage by carefully repositioning himself and pointing the tip of his rod away from the log.

The fish reveals himself, larger and with more girth than the man witnessed only moments before. His heart pounds as the fish breaks the surface in a flash before diving deep into an unseen pool behind a fallen cedar tree.

This exchange of wits, smarts and stamina goes on for a few minutes as the man reels fervently and plays the fish while the fish cleverly plays the man until the line goes limp.

The man removes the pipe from his clenched teeth. The tobacco has been reduced to ash and he puts the warm pipe in one of his many vest pockets while he retrieves his line, which now comes easily. To his amazement, the hook appears bent.

He shakes his head in disbelief and removes the pipe from his pocket, turning it over and tapping it on his palm to remove the spent tobacco, which quickly washes away in the current. He reaches into his pocket and retrieves another pipe. He packs it with fresh tobacco, cracking a smile in his defeat while noticing a vacant swirl downstream.

Just being there is a privilege and the fisherman knows this, but this day, the Two Hearted River owns the trout.

The man removes the needle nose pliers from another pocket and bends the hook back into shape. He knows the Royal Coachman will fight another day.

Posted by Vacation Publishing at 4:45 PM