Life between the lakes, part 26 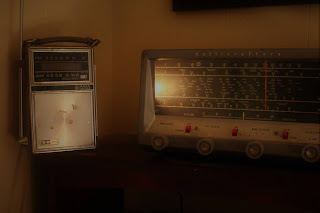 Life between the Lakes, part 26

I’ve had a lifelong fascination with radio, especially AM radio. Currently, in Deer Park, I am perfectly situated to tune into stations from across America. But on clear nights, I search for signals from faraway places with strange sounding names.

Sometimes I have to work the antenna to get them through the static while sometimes WSM out of Nashville sounds like it is broadcasting from down the road.

The signals fade in and out as the atmospheric conditions change and I often get three different weather reports from three different places all within a short period of time. (I find it amusing.) The other night I got three different hockey games and one of them came skipping across Lake Superior from Canada.
As a kid, I remember being with my cabin family and how Mary Lee became so excited when she and my sister were able to tune in WLS out of Chicago. Back in the seventies, they played pop music, much like CKLW or Keener 13 (WKNR) in Detroit. But originally the call letters of the station (WLS) was short for World’s Largest Store.
You're welcome. Now you are on your way to being a font of useless knowledge like I am.
WLS has a different format now but the reach of that 50,000 watt blowtorch is still impressive. It’s amazing to me how remembering old radio stations unlocks a flood of memories.
One summer, cousin Jack was going to be interviewed on National Public Radio about his book and his mom (Auntie Jean) wanted to hear him.
I rigged up a Rube Goldberg style antenna in the shed at the cabin hoping to bring her sons voice to her at the cabin. It consisted of a boom box, with foil on the antenna which was carefully wrapped with a hanger, which was clamped to an eight foot piece of metal that I had wrapped in a bicycle chain for more connectivity and wedged in the rafters of the shed.
Whether everything I made actually worked or not was impossible to scientifically explain, but I was able to snag the FM signal for NPR from Minnesota and Marquette. We’d listen to one and it would fade out so I’d adjust the radio and we’d listen to the other.
The stations were in different time zones so it got confusing and the same went for hearing the different weather reports. Bouncing back and forth between them we never did get to hear the broadcast we were hoping to hear, but enjoying the pot of coffee and cinnamon rolls that morning is something I will never forget.
The UP is an amazing place for picking up radio frequencies. I have a portable Radio Shack emergency walkie-talkie that I plug in from time to time in my Jeep. And while nobody seems to hear me when I broadcast for a radio check, I can hear people from as far away as Texas.
Needa’s recovery has been coming along better than I expected. A fierce wind nearly blew us over on our afternoon walk, but it has subsided.
Right now, there is absolute silence outside.
This is one of the reasons I am here.
The other reason is because I cannot think of another place in Michigan that provides as much year round beauty as Deer Park.
The moon is parked above the lake and is obscured by clouds. I just listened to the end of another hockey game. The station broadcasting it abruptly went back to playing tunes from the 30’s and 40’s; music I love almost as much as I love rock and roll.
The Upper Peninsula shoots.
And scores.
Every time.
Posted by Vacation Publishing at 6:06 PM