Life between the lakes, part 25 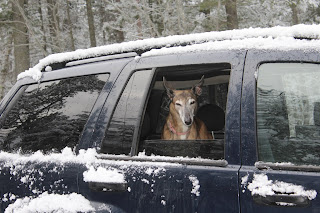 Life between the lakes. Part 25, Major stressful edition.
And kinda long.
Yesterday, I discovered a talent I never knew I had and hope to never use again:
DRIVING WITHOUT BRAKES.
Needa had a major oral surgery procedure scheduled. We were up at 6:20 warming up the Jeep (it was -10) for our trip to the vet in Sault Ste. Marie, MI. We were the only ones the road until we got to town and saw a logging truck as we crossed the train tracks near Timber Charlies.
We and did not see anyone as we came to a slow roll at the intersection of M-123 and M-28. It was the slow roll that bugged me. I thought something in my brakes had frozen.
We drove for about thirty miles until we reached the four way stop between Hulbert and Strongs. Sensing something might still be happening with the brakes, I was cautious, turning off the cruise control as I hit the speed bumps, a half a mile from the light. It still didn’t feel right.
As we merged onto the on ramp of I-75 my stomach dropped a little because as I pumped the brakes we were not slowing down as fast as we should have. We still slowed down but again, I attributed it to frozen brake lines and thought if there was more friction (and I used them more) things might improve.
Or melt.
They didn’t.
With few cars on the road and slow speed limits in the Soo, I reached the vet, dropped off Needa and headed back to Newberry, where I had an appointment at Newberry Motors that I made the day before when I sensed the potential issue with the brakes.
The traffic was clear along M-28 and as I approached the four way stop between Hulbert and Strongs, I knew I was in trouble. Again, there were very few cars on the road. My cell phone doesn’t work in parts of that stretch so there was no calling for a tow.
Since I’d made the drive many times, in my mind I visualized the rest of my route and started planning how to make it in my compromised condition.
I anticipated them, hit my brakes (which the dealer later said were 98% shot but worked barely enough to slow me down.) I somehow perfectly judged the distance I needed to stop or do a rolling stop and would then shift the Jeep into “park” as I did a slow roll into the intersections and nobody was in front of me as I made the last turn to go down the hill toward the dealership.
I finally arrived at the dealership.
I thanked God for being my co-pilot.
Thankfully Aunt Carla was in town doing good deeds and picked me up and we went back to Muskallonge. She let me use her vehicle so I could make the two hour trip back to the Soo to pick up Needa, who was in rough, heartbreaking shape when I got there. She just had 12 extractions.
Goodbye two mortgage payments.
But it was worth it when she thanked me with her toothy smile the next morning.
We got home and it was still a little light outside. I spent the rest of the night drinking vodka and trying to keep her comfortable as I feel asleep on the couch next to her.

By the next morning the anesthesia had worn off and she perked up as I fed her chicken rice, diced chicken breast and low fat cottage cheese. Much to my surprise, when she saw me get up to take Jack out for a walk, she got up too.
Our walk was slow but steady. The sun was out, the wind was gone and when it came time for treats (more chicken breast) she did not lose her spot in line.
It was a harrowing and stressful experience and today I’ve had more time to reflect on it. As the day continued Needa was more alert and seemed comfortable. It was clear that I was more stressed out about it all than she was, as she has continued to rebound like a champ.
The future of my jeep is uncertain but I’ll have the weekend to mull things over and decide my next course of action. Jack and Needa are now resting quietly after dinner and we are listening to Steely Dan, Aja as the sun sets to our right.
I am blessed each day knowing that God is with me even when I am not thinking about him.
Tomorrow will be another day full of opportunity and adventure in God’s country.
He KNOWS it's his country.
He is the ultimate artist.
He created everything in great detail and I am here observing it as it unfolds.
Posted by Vacation Publishing at 5:44 PM