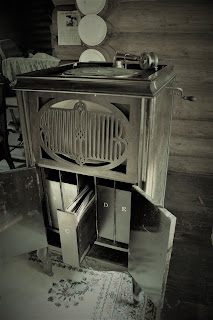 The hot spell in Deer Park has seemingly come to an end. After a couple of weeks of unseasonably high temps in the 70s and several days in the mid-80s, today it was much cooler. Late in the afternoon a thick fog rolled in from Lake Superior covering Muskallonge Lake. It took on the appearance of the snow squalls we had all winter. Throughout the evening I heard many rumbles of thunder but nothing cracked the sky.

This reminded me of something that happened when I was a kid.

One July morning in the mid-1970’s my Dad and I went fishing after hearty breakfast of crispy bacon and flapjacks, likely washed down with a cup of TANG. The sky was overcast, there was a layer of fog that was thickening and the lake was dead calm.

We departed in the 12 foot Alumicraft powered by Dad’s 5 horsepower Sea King motor. We settled in a favorite spot near the middle of the lake and soon, the thickest fog I’ve ever seen invaded like layers of liquid cotton. With the fish biting so well, were in no hurry to get back to the cabin.

Our visibility was poor but we kept hauling them in; pike, perch and more pike, and when it came time to head back to the cabin, we weren’t exactly sure which direction to head because we had been drifting for so long.

My Dad started the motor and with a beautifully bruised aromatic puff of the gas/oil mix we were off.

He carefully navigated us through the fog but we had lost all sense of where we were in relation to the cabin. He kept the motor at a slow speed as we steered toward what we knew would eventually be a shoreline.

The worst case scenario was, even if we were turned around, all we would have to do was follow the shoreline back to the cabin, even if it meant going the long way around the lake. We literally could not see more than twenty feet in front of is and naturally, I wondered if we had enough gas. My concern was prevalent but after talking to Dad I was reassured that we would be fine.

That was enough for me.

With his assurances I felt better but still had an uneasy feeling not knowing where we were or how much gas we actually had. After about twenty minutes in low gear, he cut the motor and let us glide. He stood up. We heard voices in the distance. Maybe there were other fisherman out there just like us who were lost as well? My Dad turned the direction of our gliding Alumicraft toward the noise as we drifted in silence.

First, there was a murmur of voices and then we heard music. It was unmistakably the great John Phillip Sousa, Stars and Stripes Forever; a tune I knew all too well as if was often used to roust us out of bed in the morning.

My family had carried the old Brunswick Victrola down to the lake and placed it at the end of the dock as a sound beacon to guide us home.

To the best of my knowledge, that precise event has never been duplicated in American history, though I am sure there have been variations on a theme. I share this memory because there will come a day when memories like this will be forgotten and I will be gone.

That day (God willing) should not be soon, as I feel like I still have a few good stories to tell.

Posted by Vacation Publishing at 7:27 AM