Life between the Lakes, part 50 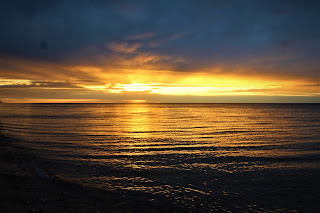 This week’s best headline from a Facebook page in Grand Marais, Michigan:

“If any one sees a swarm of bees in GM. Brenda G is looking for hers after a bear got into her hives.”

Only in the Upper Peninsula.

The days leading up to Memorial Day weekend have been sunny, cool and blissful. The traffic picked up on Thursday and by Friday there was a steady stream of cars along CR 407. Muskallonge Lake State Park is at full capacity and the lake is alive once again with boaters, fishermen and kayaks.

We have gone a long time without rain yet everything is still in bloom. I didn’t realize there was a large lilac bush on the property until last week and within two days it became fragrant. I could live off the smell of lilac and pine. Even the fish essence of the lake is a welcomed aroma.

The dragon flies hatched this week. They used to terrify me as a kid because of their size until I learned they were harmless. The last two days they have been hitching a ride on my shoulders during our afternoon walk.

Earlier in the week the blood moon kept me company most of the night when I couldn’t sleep. It was straight outside my window casting white river across the top of the lake and remained visible until almost dawn. It looked like an ultra-bright balloon, tethered by an invisible rope to the earth with a polished shine like a cue ball. The moon was settled comfortably in the sky and deserved to be admired. But the moon is just the moon.

The new neighbors that I met this past winter have been here since Thursday. The have been busy clearing out trees and shrubs to improve their view of the lake and it has improved ours as well. They are really nice people so I didn’t mind letting them in on some of my favorite fishing spots before they launched their pontoon yesterday.  I could sense the excitement of the kids, getting their first fishing experience on Muskallonge Lake as they ran to the dock. There are no secrets here in God’s country. Between the winter visit and this week, several beers have been hoisted with this family. Good dudes.

On Saturday I had the best steak I’ve had since I left Royal Oak when Cousin Charlie came to town with beef from Fairway Markets. Yesterday was Brat-fest at another friend’s place down the road on Lake Superior. Watching the sunset over the big lake is an experience.

I have visited Lake Superior hundreds of times in many different places and each visit creates another memory. When I leave it, some of me stays there. When I return, it is reclaimed. Staring into the big lake offers reassurances that cannot be found anywhere else.

Today is the anniversary of Dad’s passing six years ago. I know he would have loved that I finally moved here.

I am an orphan. Sometime I feel like a 55 year old runaway, who is getting to old to run away.

Posted by Vacation Publishing at 7:18 AM