Life between the Lakes, part 51 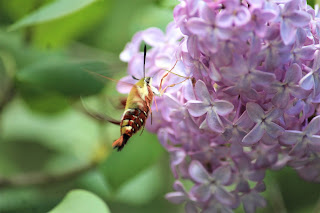 Some of the most fascinating things found in the forest are often overlooked because they are not noticeable.

Sunrises and sunsets are beautiful, yet obvious and predictable. But the best discoveries can be random. Yesterday, Carla reminded me that she had a jar for me to fill with lilacs for my writing desk, so I ventured back to the huge lilac bush along the property line that I didn’t know existed until last week.  While admiring the butterflies and bumblebees, I noticed another creature I had never seen before.

I had a handful of lilacs when he perched himself upon them. At first I thought it was another form of a dragonfly I had not seen before, but when I saw the colors and wings, I knew it was something different and I got excited because it looked like a baby humming bird.

After snapping these photos I looked at them and did some research and noticed the antennas coming protruding from its head and a large, albeit thin, tongue jutting out, almost like a lizard. As it turns out, this beautifully colored creature is an insect and not a bird but rather a Hummingbird Moth. I remain thrilled because they are said to be pretty rare.

They fly and move just like hummingbirds. Like them, they can remain suspended in the air in front of a flower while they unfurl their long tongues and insert them in to sip their nectar.  Butterflies and bumble bees joined in and soon it looked like a National Geographic love fest.

Their wingspan is only about 1.5 inches and when these guys were close, they did not look bigger than a quarter. I lovingly tried to coax them down from the heights of the bush so I could photograph them and occasionally they listened.

These photos don’t do justice to what I witnessed. Their brilliant colors are stunning from the ultra-fine green back feathers to the red, orange, black and maroon body, all the way back to the tail feathers with a delicate hint of red in the wings.

Dedication to awareness and watching the woods come to life is just another fascinating element of living in Deer Park. There’s magic in every moment and miracles found each day in my surroundings.

Posted by Vacation Publishing at 7:22 AM