Forty years ago. I remember it like it was yesterday. 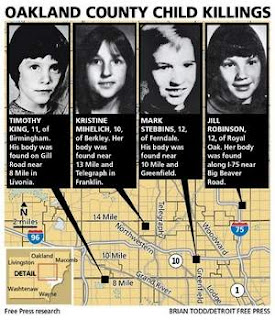 There were five words frequently spoken in homes across Metro Detroit in the late seventies. Everyone was scared and everyone was talking about it.


Those words became permanent parts of the architecture of homes in Royal Oak, Ferndale, Berkley and Birmingham. The ordeal, which lasted for 13 months was an unbearable loss that has been with the families in every step they’ve taken on this earth since 1976 and 1977. It has also stuck with the rest of us.

Friends, classmates and communities were scared (and rightfully so) because we were living a real nightmare. Four kids my age had disappeared and turned up dead over a period of almost two years. I remember reading about it regularly in the Daily Tribune and trying to make sense of why it was scaring me so much. It was probably because it was scaring our parents and parents everywhere. In my neighborhood we were either walked to our friend’s houses and back or had to call our parents the moment we were leaving a friend’s house, even less than 200 yards away, to let them know we were running home.

Was it parents being paranoid and too cautious? Of course not. The crime rate was low in our “Leave it to Beaver” world in Royal Oak and kids didn’t get kidnapped or murdered; that is, until those thirteen months in 1976 and 1977. Then everything changed. It was mass hysteria. It was the worst possible crime that could be committed; kidnapping sexually abusing and then killing a child. And the crimes have never been solved.

If you grew up in that area in that time, I’d reckon these words might still make you uncomfortable:
Task force
Stranger danger
Shotgun blast to the face
Big Beaver Road
7-11
American Legion Hall
Tiny Tim Hobby Store
Skateboard
Drug store
Candy
And fried chicken, the last meal fed to one of the victims before he was sexually abused, meticulously bathed and killed by a psychopath who has never been caught. This case remains the most remembered in the area forty years after it happened. Was it incompetent police work? A cover up or just bad luck that it could not be solved?

Today we are no closer to finding answers than we are counting the snowflakes that fall outside in this February flurry that brings a chill to our bodies, much like the chill we felt when we heard the words “late model blue Gremlin” on the evening news.

Posted by Vacation Publishing at 8:46 AM