Lighten up while you still can--remembering Glenn Frey 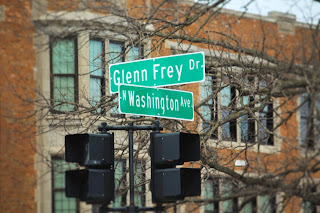 That’s good advice to heed in our hyper-sensitive out of control country, don’t you think? Thank God we have rock and roll music to help navigate us through this quagmire of dysfunction, which is why we all need practice what the late, great Glenn Frye preached and “Take it easy.”

That song was the Eagles first single and it was a smash hit, paving the way for one of the most storied and successful rock bands of all time as they forged their indelible career in the meat and potatoes days of rock and roll.

By now, everyone knows that Glenn Frey grew up in Royal Oak, Michigan.  He lived a block away from my family’s first home but was cutting vinyl on Hideout Records by the time I was a toddler. Still, nearly everyone in the neighborhood had a story about him. He graduated from my high school, Royal Oak Dondero and the stories about him were plentiful, even though a good many of the people who said they remembered him graduated several years after he did. But so what. That’s ok. We’re all getting old and our memories are getting fuzzy.

The simple truth is that we want to be connected to greatness and rightly so. Glenn Frey was the epitome of rock and roll greatness. “He went to my high school” was something nearly everyone who went to Dondero bragged about over time. Face it, when you tell people you grew up in Royal Oak it was much cooler to say it was the boyhood home of Glenn Frey rather than the place Jack Kevorkian lived and worked.

Though the Eagles created a new hybrid of what many call “Southern California Rock and Roll,” only one of them was from California (Timothy B Schmidt) and a part of each of their youth was evident in their music. Frey was a protégé of Bob Seger and though he was never laudatory of growing up in Royal Oak, he never forgot where he came from and neither did we.

The Eagles were real musicians who wrote their own songs, played their instruments and created a body of work that brings me to the universal conclusion that it’s not that I am getting old; today’s music really does suck.

The Eagles had something special and it wasn’t just a “right place at the right time” sound. This was evidenced by the fact that despite the amount of acrimony that existed in the band, they continued to make great music together even after they reunited for zillions of dollars.  Ultimately, they cared about the music and cared about each other. When Joe Walsh tried to sum up his grief about Glenn’s passing he said “It’s not that I can’t find the words, it’s that there are no words.”

Very recently (and quickly) the powers that be in Royal Oak passed a resolution to rename the street that borders Dondero High School (now Royal Oak Middle School) in Frye’s memory and yesterday the sign was unveiled. There was and will continue to be a tremendous feeling of pride all of us Oaks have for Glenn and for how the Eagles music helped provide the soundtrack to our lives. I can’t help but think about Frey whenever I drive in through my old neighborhood in south Royal Oak---east on Lincoln Ave then past Longfellow, Mohawk and Wyandotte Avenues.

Royal Oak is a far cry from Winslow Arizona, but you can bet there will be plenty of people stopping to grab a picture at this corner, after all, it’s such a fine sight to see isn’t it?
Posted by Vacation Publishing at 11:08 AM