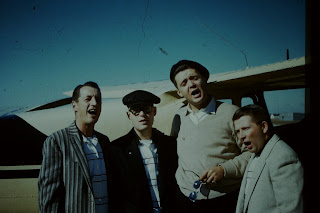 When I think about my Dad, it is impossible to fully understand what his life was like before I came along. Granted, my brother and sister broke him in and wore him down by the time I was born and in truth, they did an admirable job preparing him for the line of work I eventually fell into as a musician and a writer. Sadly, I’m not doing much of either these days but I know my Dad would be proud of my effort, commitment and the short career we always hoped would fly but hasn’t quite taken off.

Very few of my friends knew my Dad was a great musician and vocal music teacher in his early years. Before he was my Dad, he was in a Barber Shop Quartet called “The Four Bearers of Harmony.” (He is pictured second from the left)

They were the Barbershop Quartet State Champions of Michigan sometime in the 1950s in whatever the competition was at the time for these harmonic non-rock stars. However, their success brought a demand for their performances and they appeared all over Michigan, taking a single engine airplane belonging to the family of one of the members, Bob Mulligan, to the shows in Northern Michigan.

I recently found an article in the Traverse City Record Eagle mentioning their performance in 1957. I am not sure if this was the infamous “The time they could have crashed” incident, but my mother remembers it this way; more or less.

The quartet was in the single engine plane, tying to take off but the load was too heavy,wind blowing too hard or perhaps there was an unknown mix of both combined with the fact that the pilot of the plane was cocky, young, inexperienced and may or may not have been a democrat.

The plane failed to take off, so one of the guys got out and at the self-confident pilot’s instruction, lifted the tail off the ground and ran along with it as the plane picked up speed. At the last second the guy was pulled into the plane by the other members and somehow got the plane got off the ground and took flight. Fortunately, they had all packed extra underwear.

I know my father was not the one performing that act of asinine heroism. I speculate with a fair degree of certainty, however, that after he told that story to my mother (who was pregnant with my brother or sister) that perhaps he sang something in witty three part harmony with the other members, lyrically describing that the previous, near-fatal maneuver should never be attempted again by the pilot.

“If this plane should ever crash,
We’ll kick your melodic, imprudent baritone singing ass.”

Let it never be said that Barbershop Quartet Members didn’t lead exciting lives in the 1950s.

I am melancholy tonight and am grateful for the relationship I had with my Dad and the things he gave me. He loved me even thought I never quite flew like he did. But 2016 makes me want to reach higher for him.
Posted by Vacation Publishing at 5:02 PM