This was hard to write but like so much I’ve had to write the last several days I had to write it. Unfortunately death separates some of us from God. But during this week I feel that I have moved a few hundred steps closer to him.

When C and G Newspapers writer Robert Guttersohn’s piece about my book appeared in the paper today he wrote “Each of Wurdock’s stories confronts death in one way or another using the UP as a backdrop” I read it again and I panicked and thought; oh crap. . .that can’t be good for book sales.

But after these last few days on planet earth and the sad events previously mentioned here, it reaffirmed what I’ve known all along, which is that God has much heavier things going on than to be concerned with sales figures or my own selfishness.

In fact, Guttersohn interviewed me last week, before I got the last phone call from Keith and before the last lunch we had on Friday. All through the interview I mentioned to him that the underlying theme of most of what I’ve ever written was done is based upon the universal premise that every day life is but the flicker which serves only to illuminates our brief existence.

After completing the book "Bending Water and Stories Nearby" earlier this year, I did recognize how death and loss was part of this anthology. Still, when I was just out walking my dogs this evening I thought Robert was exaggerating the point in his article, so when I got home I grabbed a copy of the book and realized how right he was about it . . .and about me.

In my book twelve of the fourteen stories have obvious or less subtle references to someone dead, dying , wanting to die or trying not to die. Of the two remaining stories, one of them talks about a dying relationship (which can often feel like death) and one is about a dog who was left for dead, but became the sole reason for his owner wanting to live.

If I sound obsessed with dying it’s only because I am consumed with living.

I’m not sure what a shrink would think of that, nor do I have an interest in finding out just now. I am no stranger to death, from events in my youth and those as fresh as attending Keith’s funeral yesterday.

Keith’s funeral was held in a room full of love, surrounded by beautiful and fragrant flowers where beautiful music was sung and played and many people who may not have been prepared for what was to come even though we’ve been preparing for a few days.

The loveable and amiable Rev Richard Stafford (Keith’s brother) presided over the service. Let me rephrase that. . .Keith’s brother Rick wrote and led a beautiful celebration of Keith’s life. I have never been at a place so sad where so much love was radiated and the truth spoken about such a special love between brother and brother. The words also provided comfort in conveying the truth about what the gospel of Jesus holds and what it brings to those who believe it or live it.

At times Rick was redundant when he spoke to Keith’s son Aaron: “He loved you so much.”
But looking everyone in the eye and expressing what Rick did, especially to Keith’s son, were words of truth that needed to be said over and over and they will be remembered.

The service was as heartbreaking and poignant and it was funny and memorable; more than any service I’ve ever been a part of in my life. When I die, I hope mine is the same and that I will be remembered in the same way.

I am honored to have been a part of Keith’s life and this occasion and have written extensively about it here for the last few days. I am also honored to be a part of your life. It has been so great reconnecting with so many people during this time on facebook. Facebook? Interacting with people on a computer? What is that about (everyone over 35 has said, always)

I always thought death was hard to talk about. Maybe that is the reason that subconsciously I’ve included it so much in most everything I’ve written, not just this week, but for a long time.

It’s part of the human condition recognized as much if not more than birth because in our blurry world it is easy to miss an announcement of someone being born while our tendency is to let bad new travel fast. Meanwhile, in the life “in-between” too many of us plot ways to avoid what’s important and allow ourselves to live in avoidance or in a world of watered down emotions justified by posting memes we hope will reach the important people in our lives. What crap; and I am just as guilty of that as you are, so let's change it.

Family, friendships and marriages are things we need to work at every day if we have any expectation of success and happiness with them. I don’t know many people with an unhappy marriage who are happy in life anymore than I know unhappy people who are pleased with their success, wealth can accomplishment but who have no soul. It doesn’t work that way. . .see Life 101 for reference.

Pain and loss casts a long and dark shadow, but remember that we live most of our lives in the light. 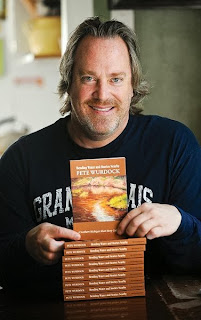 http://www.candgnews.com/news/author-finds-creative-spark-writing-about
Posted by Vacation Publishing at 9:50 AM