Champions of the heart


My dogs are messy eaters.  They also leave their toys out, never make their beds and try to dig holes in the yard when I’m not watching. They are the most beautiful, imperfect dogs in the world. Being Greyhounds their story is not uncommon to the breed, but a greater purpose was revealed when they came into my life. Jack and Needa are my two kids; my family. When we pass people on the street many ask me if they were rescues.  “Sort of” I reply. “But I didn’t rescue them, they rescued me.”

After the effects of a divorce, losing my job and the ensuing depression, I needed something to change. Many months later after getting back on my feet, Jack invaded my life.  A few months later my job didn’t work out and I became an unemployment statistic again. Times were hard once more and had it not been for Jack, I would probably still be laying in bed.

But parenting doesn’t give you that option, even with a dog. It became clear one day as I stared into his big brown eyes and saw myself. There were scars on his body from spills on the track and fights with his kennel mates. But I knew his biggest scar was inside, concealed somewhere deep inside his extraordinary and enduring heart, because that is what our dogs do with their pain; they hide it from us while they unselfishly absorb ours.

Shortly thereafter I got a call from the greyhound rescue about a new female who had just arrived. When they met Jack immediately rested his head on her back. In the canine world it may indeed be a sign of dominance, but it’s also a sign of love.  There was no way I could afford another dog, but I was reminded of an old saying; nobody ever became poor by giving. Animal shelters are full of dogs who want to love and be loved. Dogs wait in them hoping for a second chance. But after being forced to race for living greyhounds really only have one chance.

The politics of greyhound racing are complicated. When the dogs no longer make money they become unwanted. The sad, simple truth is if they are not humanely euthanized, they will be inhumanely euthanized. Jack and Needa were given their one chance and I was the lucky one who took it.

With racing behind them, I’ve had the joy of watching them become dogs again. Every day they are like a child waking up on Christmas morning. I may be poor in net worth, but with them I am rich in spirit and blessed with happiness. Raising them has been nothing short of an amazing experience.

We are a family. I don’t like to boast about my parenting, but yeah, I am a “great one.” But it’s because of the joy that Jack and Needa have given me and knowing every bit of love I give, I get right back in spades. 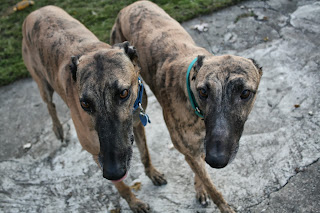 Posted by Vacation Publishing at 8:06 AM