Today I am back in the blog business. In late August of this year I launched a new page on facebook page to serve as the official home for my new book Bending Water and Stories Nearby. The page contains all things related to my new book including artwork, sample chapters, reviews, stories from the road and videomercials, which are new this week.

It can be found at: www.facebook.com/blueboundarybooks

Bending Water and Stories Nearby is my forth book and was released through the new imprint, Blue Boundary Books on August 26, 2013. It will be available for purchase at my website and as well as numerous retail locations throughout Michigan via my distributor.

The book follows the regional success of my book "Places I Hide" photos and poetry of Michigan's Upper Peninsula and two other books. In May of 2013 a campaign was launched through Kickstarter to fund the printing of Bending Water and Stories Nearby. It was a successful campaign  and the pre-sales for Bending Water were high enough to cover the cost of the initial run of the book and I am working hard to promote it in whatever way possible.

What follows are the media quotes which appear on the back cover of the book. But this blog is not just about promoting my book and talking about the Upper Peninsula of Michigan (though I will do that a lot) It’s where I will continue to share my life will with regularity for anyone who wants to listen.

Pete Wurdock writes stories that are so real, you’ll feel like you already know these characters, and you care about what happens to them.  Bending Water is a beautiful anthology, and you won’t want the stories to end.

Peter Wurdock has infused new life into the literary landscape with a collection of short stories that are reminiscent of the pioneering narratives of Hemingway’s Nick Adams stories, avoiding the pitfalls of the derivative by plotting a course through the rough, unpredictable, and often isolated terrain of Michigan’s natural splendor, populated with characters wrestling with emotive realization in a voice that is as equally fresh as it is contemporary.

Possessing a gift for concise, laconic, and lyrical prose, Wurdock fashions together a series of vignettes embracing the overwhelming density of the forests that often confines these characters to the haunting echoes of their past and leads both character and reader to the light of realization and epiphany that ultimately sets them free, for better or worse, in a manner that is worthy of such literary landmarks and meditations on small town life as Sherwood Andersen’s Winesburg, Ohio. 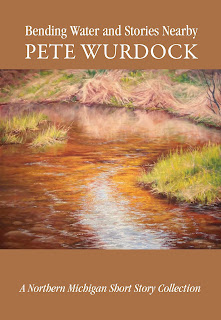 Posted by Vacation Publishing at 10:10 AM