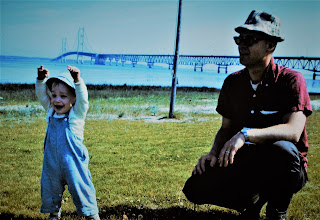 These were my first steps in June of 1966 in front of Fort Michilimackinac on our way to the Upper Peninsula.

At the cabin, my dad taught us about accountability out on the water, before we could even drive a car. The sweet smell of a gas-oil mix emanated from his Sea King Five Horsepower motor as a bruised puff of smoke was a heavenly smell to us.

He bought it from Montgomery Wards in the 1950s and kept it in perfect running condition. It was a thrill it was for us to be able to feel our first taste of freedom in a twelve foot Alumicraft boat driving around the lake without supervision before we had a driver’s license.

From the time I could walk, I had a fishing pole in my hands thanks to my dad. This is why we loved the cabin so much. Fishing has always been highly prized in our family. Landing a keeper was a bonus that heightened our excitement and made for more than just the fishing stories we’d tell our friends. Hearing tales from Dad about those elusive lunkers who fed in the evening among the lily pads and reeds at the west end of the lake was the stuff that dreams were made of.

At the cabin, our fathers’ adventures made them legendary and rightly so, because today we are still remembering details of our youth. From my dad’s crispy bacon and Mapleine to his buddy Ron’s flap jacks and salty oatmeal, they are all a permanent part of our collective memory. We also remember how they could fix or build anything, even with primitive tools.

My parents came from a time when people, by today’s standards, seemed more sensible. It was when they looked after what they had a little more carefully and approached life a little less cautiously. It was at a time when store bought items would not break so easily, when people would not throw things away so carelessly. Though I never became a father I learned what it was like to be a great one by admiring my own.

Our family grew up without the frills many others had. I wore my brother’s old clothes. My brother and sister and I worked for an allowance and obeyed our parents. If we went out to eat it was for a special occasion.

My Dad was a veteran who worked two jobs most of his life. He taught vocal music and English at the high school level and painted houses in the summer. But he would always plan his time so we could be together at the cabin, even if it meant coming home to finish a job and then turning around to head back up north a few days later.

My father spent his time on earth wisely, and when I sat bed side with him on his final day we knew where we stood with each other. Our family had no regrets when he passed except wishing that he could have spent more time with us.

Today my siblings and I recall the joy our father had doing what he loved to do, especially at the cabin and the Wisconsin cottage. Though now that he is gone we understand that his real joy was sharing it all with us.

Posted by Vacation Publishing at 12:55 PM

It was a good article Hyderabad to Goa Flights