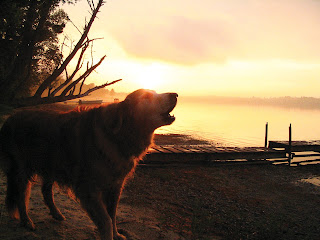 The night this picture was taken was so quiet and calm I could hear the distant voices of fisherman scattered across the water almost a mile away.

One boat got within a couple hundred yard of our beach and while I didn’t mind, Sparky took exception and let out a howl that carried around the perimeter of the lake like the echo of a voice in a canyon.

I will never forget the rogue thunderstorm we encountered on Lake Superior one July afternoon. We barely made shelter into a grove of trees near the mouth of the Sucker River. Immediately I became cold and drenched as the temperature plunged and the wind howled. Sparky sat on top of me to warm me and keep me dry until the storm passed.

He loved me as much as life itself and I reciprocated. Sparky was my shadow for eleven of the thirteen years he belonged to me. The first two years of his life he was either running or eating or sleeping and he belonged to my buddy Tony. When Tony got married, Tony knew how attached I was to this dog and before the words were out of my mouth he said:

“He'll be better off with you.”

Sparky came with me and we enjoyed an amazing life together, racking up just over 6000 miles on our walks. He was a celebrity everywhere we lived and his death made the six o'clock news.

Sparky loved the cabin in the Upper Peninsula. My brother and I would drive tennis balls out into the lake, almost 100 yards a crack and he never lost one. His sense of sight and smell was amazing and he had a unique method of retrieving the balls.  He would dog paddle out in the direction it landed and then drop his back legs thereby rising his head like a periscope and find the bobbing ball.

He loved spending time at the cabin, running bravely through the woods at night and spending as much time in the water as I would allow. Then the day came, just past 13, when his body could no longer contain his spirit and I painfully said goodbye, his arm around my neck as he took his last breath.

With an open marble box I waded through the shallows

To scatter you into the lake you loved.

As tiny bits of you disappeared, leaving a trail like the light from a falling star

Through the water I saw footprints, unmistakably yours, from the summer before

They were still on the bottom, undisturbed.

In life you were not shy with your mighty battle cry

But I lost the fight that day and filled the lake with a salty stream of rain.

Posted by Vacation Publishing at 12:48 PM