Life Between the Lakes, Part 59 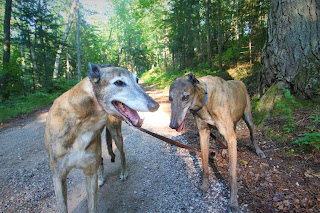 Anita Wood (Needa Lou) turned 12 in early May and Tiger Jack Burke is less than 3 months away from becoming 14, or the human equivalent of being in his mid-90s.

While writing “Life between the Lakes,” has been an inspiring experience for me, I am not sure that my dogs have taken the same shine to what I consider an inspiring environment. It is impossible to know for sure, as many of their actions often point to the contrary.

They have loved the walks (three per day) and love the quiet environment we experience, but I know they miss being around people. Socialization in this rural area has been very limited for us.  It is so quiet that Needa can hear a car a half mile down the road; stop, look, listen and wait before I see it. She is kind of like Radar on M*A*S*H*

Greyhounds are a rare breed in general; especially when found walking across a road at the top of the UP. More people than I can remember have stopped and admired Jack and Needa or got out of their vehicle to pet them and learn about them.

Since the day I’ve had them, nobody who has stopped to chat has ever left the conversation without huge smiles and a gratuitous amount of thanks.

Jack and Needa are both slowing down.

Jack has never kissed or shown any sign of “mushy kissy affection” toward me. But he owned the couch.

For years, he used to lie on my lap, warming my feet and legs. But the closest I felt to him was when he slid between me and the back of the couch; his warm body soothing, while the feeling of his head on my chest was as great as you would expect a loving dog’s to be.

Jack is like every Clint Eastwood character. He’s tough, funny, not politically correct and was rugged on the track with scars to prove it. He is stubborn but a completely lovable dog, 24/7. The best he can do to show affection now is walk between my legs or sidle up to me because he knows an ear scratch will follow.  He owns the house.

Jack is beginning to lose his balance on uneven ground and when it happens, his helpless look invades my eyes. It accentuates the desperate look in his eyes which has been deepening. He owns my heart.

I just started Jack on an inject able schedule we will try for the next four weeks for his advanced arthritis. I never thought the legs that propelled him into flight would ever weaken. We’ll see how it goes.

Dogs are much like people. You can decipher and understand a good chunk of their life, current mood and intentions when you look into their eyes.

Jack’s eyes continue to sink slowly into that unfair canine aging machine, as my crying machine follows. I can’t imagine what life will be like for Needa without Jack. But we have been put on notice.

I'm just not sure if I am up to, or how to begin discussing it with her.

Posted by Vacation Publishing at 12:27 PM