I still dream about Franklin Elementary School in Royal Oak. It was where I learned to read, write, play kickball and occasionally build up enough courage to jump off the swing to see what it was like to fly. 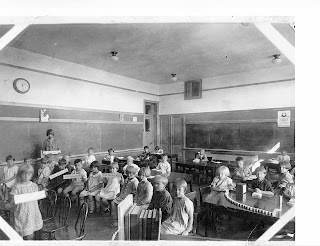 We lived at 821 Mohawk, about 12 houses away from Franklin and though it was an easy walk, sometimes I’d catch a ride with our Twin Pines delivery man or our neighbor, Mr. George, who drove a cab. I don’t know why I did, then again, who remembers these things from their youth?

My mother went to Franklin, as did my brother and sister. I absolutely loved that school and remember almost every inch of it in great detail, from the marks on the gym floor and smell of the gym to the tiny room we used for band practice.

I remember the Campbell’s Soup label drives, the Scholastic book orders, Dynamite Magazine, hot dog lunches, fluoride treatments, the area near the fallout shelter where they kept the used erasers, the multi lined chalk holders, Mr. Penrod’s goalie equipment that he kept in his office, the Sesame Street record being played by Miss Meyers, the magic square across the street, the square someone painted on the side of the school that we used for a strike zone, the barrels, Ms. Hooker, the lunch monitor who meticulously went through the milk money to separate the wheat pennies from the others, Saturday morning basketball in the winter as the smoke chugged from the tall stack on the building and how Mr. Judd, the music teacher, picked me twice to dance during the special concerts. One was a waltz and the other was a square dance. Pfft.

In kindergarten I could not skip, as was often required, so I’d ditch into the bathroom/coat room until Miss Meyers came and dragged me back out. I remember my friend Freddy giving her grief one day when she did not perfectly fill in her drawing when she was teaching us to color. She promptly and defensively gave the excuse that it was “much harder to color on an easel.”

Like most of the schools south of 11 mile road in Royal Oak, Franklin is gone and newer homes now occupy the sacred space where we learned, played and reminisced.

The first photo is a classroom as it appeared in the 1930s when my mother attended. The second photo is my mother’s “class photo.” She is in the first row, second from the right. 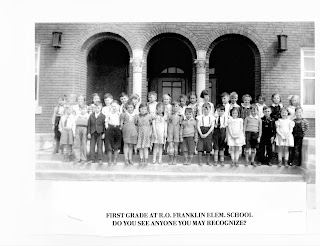 Posted by Vacation Publishing at 7:54 AM

I lived at 1310 Mohawk and remember Mr. Penrod very well as I was always in trouble. I remember thinking he must hate me for being a trouble maker but one day I got hit by a car in front of our house and he came to visit to see if I was doing well

Wow you have a great memory! I can remember a few of my teachers Mr. Ashbrook Mrs. carb, a few I can’t remember. What a great time and what a great school it was!

Does anyone know where I can find a picture of the mural painted by the basketball court? My class painted that and I can't find any pics of it anywhere...would have been about 1991.