Saying Goodbye to a Friend


Yesterday I lost one of my best friends. 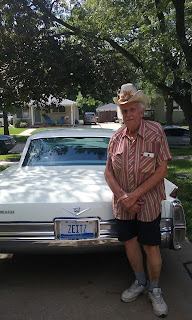 When I moved into my house in the summer of 2001 it was one of the hottest days of the year.  My brother and a few others helped me unpack. It was sweltering. Somewhere between unloading the couch and the dresser the guy next door stepped into my yard and held out his hand to introduce himself. His name was Pat. By the end of the day I was in his pool, eating chicken wings, drinking beer and sharing some laughter. It was at that moment the friendship was cemented and set the stage for the next 16 years of our lives.

Pat was old school. He worked hard, raised his family with values He was a Mason, an active member of his club and a hell of a great friend to me and the neighborhood. Pat didn’t have much in his wallet but was the kind of man who would give you the shirt off his back he thought you needed it.

After a heavy snowfall he would clear out our end of the street with his plow before anyone was up so we could all get out.  After the city plow came through and blocked the end of my driveway, he would come back and clear it out.

I would often get a call from him in the evening starting out with “Howdy neighbor.” This was usually followed by a laugh and he would say “I just ordered 2 large pizzas and one of those chocolate chip cookie desserts. It’ll be here in about a half hour.  He knew I never had any money and frequently made food runs to share or would call me giggling telling me he just made some slow roasted meat and potatoes or kielbasa and sauerkraut and he wanted me to have some. He was also famous for his chili-mac; his own concoction of chili and macaroni and cheese.
As time went on and his mobility became more difficult, I took over mowing his lawn and snow blowing the walk many years ago. He was always grateful. We were not afraid to verbally express our love for each other all the way up to our last conversation a week ago.

Pat had an old Cadillac stored in his garage. He loved the car and told me the story of how he drove it up from Texas with his family some 45 years prior. It didn’t see the light of day until this past summer when his buddies restored it for him. He loved driving it, especially in the Woodward Dream Cruise.

When I moved back into my house after my divorce this year the first words out of his mouth were how sorry he was that the divorce happened but he was so glad to have me back. I was glad to be back and wasted no time picking things up where they left off.  We shared meals, talked politics and created A LOT of laughter. When I moved back in and had no internet he bought a powerful router and set up an account for me to latch onto his. He made the password “The Best Neighbor Ever.”

Pat was the best neighbor ever. He passed away yesterday and it hurts, but I know he is no longer suffering. His demise was relatively quick. He had been recuperating at his daughter’s house since a long hospital and rehab stay these last two months. But his spirits were always good and he was trying to make it home by Christmas. This year he will celebrate it with our Lord and Savior.
He was such a kind man.

God bless you Pat. I miss ya.
Posted by Vacation Publishing at 6:07 AM